Tenochtitlan (Nahuatl: Tenōchtitlān [tenoːtʃˈtitɬaːn]), is located in the Federal District that is one of the two Royal Special Districts. Its nickname is The Light of America.

Is the richest city in the world and its the heart of finances in the world (altogether with New York). Tenochtitlan is located in the Valley of Anahuac, a large valley in the high plateaus at the center of the empire, at an altitude of 2,240 meters (7,349 ft). It was built as by the Aztecs in 1325 on an island of Lake Texcoco. The city was almost completely destroyed in the siege of 1521, but the ceremonial centre was intact; and was redesigned in the following years following some European urban standards, but the canals system survived to our time.

Tenochtitlan was founded in 1325 in the middle of the lake of Texcoco, were the ancient Aztec people were indicated by their god Huitzilopochtli, the signal: An eagle eating a snake standing in a nopalli (a kind of cactus).

This was an small barren island, there the primitive Aztecs started to build their new city. Because the island was small, they started to build new land, in that time they have invented the chinampas, the main infrastructure that nowadays it continues being.

The city was one of the biggest cities in the world (by its time) with more than 500,000 in h. All the city had the canal-based system that the modern city still has in its old district.

The history of the rest of the 20th century to the present focuses on the phenomenal growth of the city and its environmental and political consequences. In 1900, the population of Tenochtitlan was about 950,000. The city began to grow rapidly westward in the early part of the 20th century and then began to grow upwards in the 1930’s, with the Tlacaxouhcayotl Tower as the first skyscraper. The first Olympic Games in 1920 brought about the construction of large sporting facilities. In 1929, the Metro system was inaugurated. Explosive growth in the population of the city started from the 1960’s, with the population overflowing the boundaries of the Federal District into the neighboring state of Mexico, especially to the north, northwest and northeast. Between 1960 and 1980 the city’s population more than doubled to 8,831,079. In 1980 half of all the industrial jobs in the empire were located in Tenochtitlan. This caused serious air and water pollution problems, as well as a sinking city due to over extraction of groundwater. Air and water pollution has been contained and improved in some several areas due to government programs, the renovation of vehicles and the modernization of the public transport.

However, the last straw may have been the 1985 Tenochtitlan earthquake. On Thursday, 19 September 1985, at 7:19 AM local time, Tenochtitlan was struck by an earthquake of magnitude 8.1 on the Richter scale. This was a medium scale earthquake, but it occurred in a very populated area with muddy ground, and caused 2.9 billion of tomnins in damages (2.8 billion dollars). While the advanced systems of evacuation and the anti-earthquake make that the victims number were around 1,000, it could have been much worse.

Tenochtitlan is located in the Valley of Anahuac. This valley is located in the Trans-Aztec Volcanic Belt located in the high plateaus of the central empire. It has a minimum altitude of 2,200 meters above sea level and surrounded by mountains and volcanoes that reach elevations of over 5,000 meters. This valley has no natural drainage outlet for the waters that flow from the mountainsides, making the city vulnerable to flooding. It was artificially opened through the use of canals and tunnels starting in the 17th century. Seismic activity is frequent here. The soft base is collapsing due to the over-extraction of groundwater and since the beginning of the 20th century, the city has sunk as much as nine meters in some areas. A big part of the lake has survived until our times because the Aztec always watched the protection of the lake as major priority. 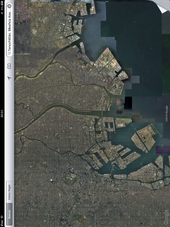 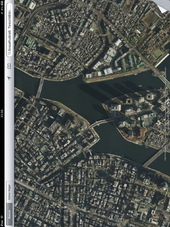 Sample of the canal system 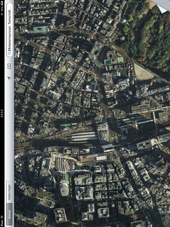 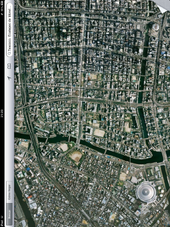 Tenochtitlan has a cold-temperate highland climate, due to its location and high elevation. The lower region of the valley receives less rainfall than the upper regions of the south; the lower boroughs of Ixtapalapa, Ixtacalco, Ixtapallocan and the west portion of Xaltocan are usually drier and warmer than the upper southern boroughs of Tlalpan and Xochimilco, a mountainous region of pine and oak trees known as the range of Ajusco.

The average annual temperature varies from 9 to 18°C (48 to 64 °F), depending on the altitude of the borough. Lowest temperatures, usually registered during January and February, may reach -2 to -5°C (28 to 23°F), usually accompanied by snow showers on the southern regions of Ajuscolli, and the maximum temperatures of late spring and summer may reach up to 32°C (90°F). Overall precipitation is heavily concentrated in the summer months, including dense hail. The central valley of Anahuac rarely gets precipitation in the form of snow during winter; the two last recorded instances of such an event were on March 5, 1940 and January 12, 1967.

The city suffered an industrial Revolution in the XVIII century, at the time that the United States was fighting for its independence. Since that time the city began to be the engine of the Aztec economy. During the second half of the XX century, the city suffered a massive diversification of the economy, it had a heavy industry (oil, steel, etc.) focused economy, and now it has a more oriented services economy.

Now days, the city is the financial centre of the country with wonderful economic districts. The city itself has two CBD (downtown Tenochtitlan and Azcapotzalco's) but in the metropolitan area there exists other two (Texcoco's and Xochimilco's). This is because at the beginning of the XX century, Tenochtitlan, Azcapotzalco, Texcoco and Xochimilco were the biggest cities in the valley, but the huge grow of the urban sprawl unified those cities in a single one: the Metropolitan Area of the Valley of Anahuac. The biggest skyscraper in the city is in Tenochtitlan's CBD the Atlixcayotl tower with 407m. (1,332ft.) but the highest building in the metropolitan area is the Cuitlahnomeh tower in Texcoco downtown with 457m. (1,567ft.).

Tenochtitlan is the most important economic hub in America. The city proper (Federal District) produces 10.8% of the country's gross domestic product. According to a study conducted by PricewaterhouseCoopers, Greater Tenochtitlan (with a population of 27.3 million) had a GDP of $1.3 trillion in 2005 (at purchasing power parity), ranking as the second richest urban agglomeration in the world, only after New York. In 2015 it is predicted to displace New York to rank first. Tenochtitlan alone would be the 12th largest economy in the world. In terms of GDP per sector, the Federal District is the greatest contributor to the country's industrial GDP (2.8%) and also the greatest contributor to the country's GDP in the service sector (9.3%). Due to the limited non-urbanized space at the south—most of which is protected through environmental laws—the contribution of the city in agriculture is the smallest of all imperial entities in the country. Tenochtitlan has one of the world's fastest-growing economies.

Tenochtitlan is served by the an extensive metro system with 229 miles (327 km) of service routes, and 842 miles (1325km) of total railways, which is the largest in the empire and the second larger in the world. The first portions were opened in 1939 and now the system has 25 lines with 456 stations. A suburban rail system similar to the French RER started operations in 1991 connecting the city downtown to the suburbs. The subway is one of the busiest in the world transporting approximately 7.1 million people every day, surpassed only by Moscow's (7.7 million). It is heavily subsidized, and has the lowest fares in the world, each trip costing 00.20‡ and taking each passenger to almost any place in this enormous city from 04:00 am to 01:00 am).

Electric transport other than the metro also exists, in the form of trolleybuses and the Xochimilco and Xaltocan Light Rail line. The city's first bus rapid transit line, the Metrobús, began operations on June 1999 in Tlacaxoxouhtilli Avenue. It was hoped that the Metrobús could reduce pollution and decrease transit time for passengers.

Tenochtitlan is served by 3 airports that carries the 15% of the aerial traffic of the country: Cuahtemoc International, with mostly flies to north and south America; Nezahualcoyotl International, with flights to all the continents, and Emperor Huecalalli International, that principally is used for national flights, but it is used to connection for flights to north America principally. This airports are North America's busiest and largest in traffic. This traffic exceeds the current capacity of the airports, which has historically centralized the majority of air traffic in the country. In 2008, about 160 million people went through the city's airports.

The city has four major bus stations (North, South, Observatory, Ixtapalapa), which comprise one of the world's largest transportation agglomerations, with bus service to many cities across the country and international connections.

The city has six main train stations North (Ayamiktlan), West (Ikalakian), South (Uitsalan), New Central Station (Nahuam-Atl), New South (Itsmayocan), Pixe .One used for commercial and five for suburban and interstate passenger trains. A suburban rail system serves the metropolitan area, beyond the city limits of the metro, to municipalities such as Tlalnepantla and Cuautitlán Izcalli at north; to Chalco and Texcoco to east and south east respectively; and Mallinalco to the south. Interstate trains are the most popular transport system in the country with services such as intercity (conventional) and intercity-express the high speed train called mitlisiuk (lit. fast arrow); only air transport manages more passengers, but in relative short distances, buses and trains are more popular.

There are also several toll expressways which directly connect Tenochtitlan with several other major cities throughout the country.

Two freeway ring-roads serve to connect points within the city and the metropolitan area: the inner ring and the peripheric avenue, which connect to one straight freeway: the Viaduct (connecting west with east, that is conformed mainly by the Emperors bridge). Traffic in this system is so dense that an elevated highway that runs on top and parallel to a part of the Periférico, had to be constructed and finished in 2007.

There is an environmental program, called "Not To Run Today", whereby only vehicles with certain ending numbers on their license plates are allowed to circulate on certain days, in an attempt to cut down on pollution and traffic congestion.

Explanade of the science and arts

Morisco kiosk, gift from theMC to the Aztecs

Atzala bridge over the Nezahualcoyotl Canal

Principal building of the Tenochtitlan AutonomusUniverisity

Chinampas in the old part of the city

Stock Exchange in Tenochtitlan (left building)
Add a photo to this gallery
Retrieved from "https://althistory.fandom.com/wiki/Tenochtitlan_(Aztec_Empire)?oldid=1245842"
Community content is available under CC-BY-SA unless otherwise noted.