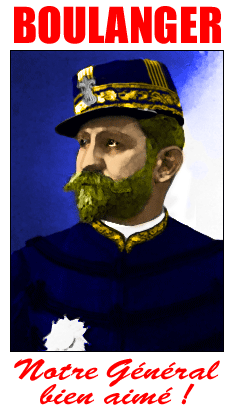 On the 27 of January 1889, retired French General Boulanger heeds the call of his followers and depose the French republican government in a bloodless coup.

With the reins of power firmly in his grasp, he prepared his revenge against Germany.

The POD is the night of the 27 January 1889. *Here* Boulanger declined the coup and was forced to go into exile when the government realise how big a threat he was and decided to arrest him. Most historians however seem to agree that had he followed his proponent's lead, his success was almost ensured.

This was due to two reasons:

1- He made himself extremely popular with the army as Minister of War by improving the life of non-officers (better foods, better equipment, more permission, more prestige, etc ...). His stated policy of eventual revenge against Germany was also seen as a way to recover their honours. Although it couldn't legally participate in political life, the french army in the past had involved themselves on a few occasion to depose or prop up a given regime.

2- The Third Republic itself was originally only meant as a temporary measure until monarchy could be restored (the first pretender refused to be a constitutional-monarch, his heir accepted in principle but had to wait for the former's death). Even though people eventually resigned themselves to being republican, it was, at the time, mostly out of expediency and not for any deep seated beliefs. Part of the appeal of "Boulangism" was a feeling of stability and instants results.

Unfortunately, *here*, Boulanger committed suicide two years after his exile and didn't write anything about his vision for what France would look like under him. Most of his followers did, however, and continued into politic. The philosophies that inspired them and the ones they created themselves ended up inspiring (among others) 2 relevant regimes in the early 20th century: Franco in Spain and Petain in France. Because of similarity in term of origin (coalition lead by a soldier united mainly in their anti-republicanism) and resulting society (corporatic), I have used them as sources for inspiration in designing Boulanger's France.

Where it goes from there, I don't really know. Boulanger would eventually try to take his revenge on Germany, but being a career soldier (and apparently a competent one), he would probably wait for the most opportune time, rearming his army and building alliances (such as Austria). With the later, you might get a WW1 type conflict two decades early.

A fair few Boulangists *here* became anti-Dreyfusard during the Dreyfus Affair and some became members of the Action Francaise. The apparently latent anti-semitism in the boulangist camp might result in the adoption by the regime *there* of AF leader Maurras' "Anti-France" thesis (That Jewish, protestants, free-masons and foreigner are opponents of France). Such a proto-nazi regime could either inspire the creation of National-socialistic or fascistic regimes much earlier then *here*. On the other hand, It might actually completely discredit some of the resultant thesis as being "old fashioned" by the 1920s, leading to different radical movements in Germany, Italy and other countries.