The End of Peace (Map Game)

It's the Year 1870 and the world is on the verge of war. In Europe, the French Empire under Napoleon the Third prepares for war against Prussia, which has been provoking Napoleon for the past few years. In the United States, President Grant leads the nation through Reconstruction, but faces opposition by white militant groups. In China, the Qing Dynasty still continues to reign, but in a weakened state after decades of humiliation and faces three rebellions. Meanwhile, in South America, the continent sees the end to one of the bloodiest wars in history as the forces of the Triple Alliance close in on the forces of Francisco Lopez.

Strikes can be given for things like open bullying of another player, editing events and responses without mod-approval and the like. If you manage to get three strikes, you will get banned either temporarily or permanently, depending on the kind of violation and how fast you got them. 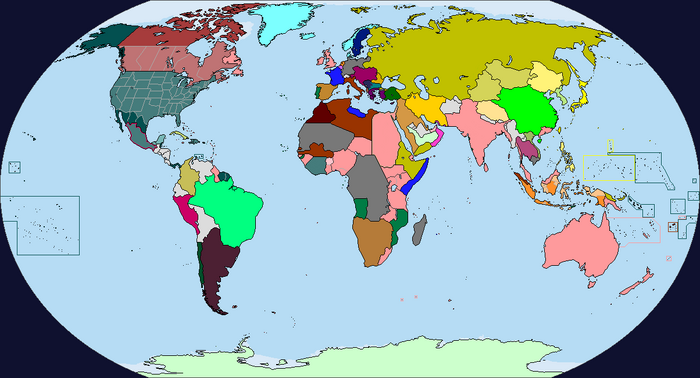 Sign up rules are: Can’t be two nations at once, you can only put your name by one. To claim a country, please put your signature next to the country you wish to be. If your nation has a puppet, protectorate, colony or whatever, then you may put your name under them and play as them as well as your nation, just put the subjugated state’s turn underneath its master's turn. If someone wishes to play a colony, puppet, protectorate, etc., then ask the master nation’s player first.

Gavrilo Princip is tried by a Bulgarian court which sparks ethnic riots in Yugoslavia over the trial and execution of Serb. Gerogi Todorov with 3,000 armed supporters marches on the former Bulgarian royal palace in Sofia and proclaims the Republic of Bulgaria. With ethnic pride hanging high a force of 150,000 soldiers and with more on the way, the Bulgarians move on a frontline stretching across the OTL 1914 Bulgarian border.

Spanish diplomats move to gain Germany as a Spanish ally and request to buy 400,000 Mausers and 2,000 Maxim guns along with German military advisors.

In Italy, overzealous government spending on the navy begins a financial crisis as inflation skyrockets. Factories shut down as the Italian economy shakes like Mount Vesuvius. Protesters appear on the streets of Rome, Naples, and Milan to demand the resignation of the current government. Protests in Taranto and actually squashed violently as sailors join in with police against the protestors. Seven die, over 60 are injured and up to 200 are arrested in Taranto alone.

The Yugoslav War carries on with both sides becoming bogged down due to intense fighting, neither the Serbs or the Bulgarians can move the front. The Serbians ask for Austrian arms while the Bulgarians do the same but for Russia. Massacres of either ethnicity take place on either side of the border sparking international condemnation of the war.

In France, royalist troops use tear gas to flush out rebel positions during an offensive in to retake parts of Burgundy making it the first time in history gas is used in warfare.

In South Africa, the government begins to quell parts of the Mau Mau Rising using the controversial but effective Concentration Camp Strategy.

"The Eagle Army", 7,000 Spanish "volunteers" arrive in Northern France to fight for Boulanger and Napoleon IV. Anti-European riots occur in Cairo and Alexandria.

The first Zeppelin airline is opened in Europe offering flights from various German cities to destinations in Britain, Austria, Russia, and Scandinavia.

A Red Scare starts across Europe with Communist Riots in the Ruhr, Bavaria, Burgundy, Bohemia, and Moscow, and Southern Italy.

The Yugoslav War carries on with hundreds dying in horrid charges being bogged down by barbed wire, machine guns, and artillery fire. Many think the no mans land of the Serb-Bulgar border is what the future European War would look like. Austrian troops fighting in Serbia show Europe the first shows of "Shell Shock." Meanwhile, Danubian Pacifists also protest in Prague and Vienna against the war.

Boulanger dies of a stroke while giving a speech in Paris. Royalist General Philip Petain along with some officers, coups the temporary government under Napoleon IV. Petain as de facto leader of royalists, offers to negotiate with Murras for the reunification of France.

Guerrilla Warfare is conducted my members of the former young Turks against the joint Greek-Russian occupation force.

The Red scare reaches North American as communists protest and attacks in Canada. This brings both Canada and the United States in fear was their been reports of attacks by the reds near the US-Canadian border

In South Africa, the tactics used to counter the Mau Mau are changed. Light armored cars are introduced and after some tinkering, the KMG 1922 (OTL Hellriegel 1915 SMG) is created as a prototype with some limited service by South African bush soldiers. The weapon proves cumbersome as it weighs up to 25 pounds with its water cooled jacket.

In Britain, many citizens and politicians begin demanding that Britain does something about South Africa’s concentration camps.

In Germany, the Chancellor with reichstag support announces its intervention in France and sends in 150,000 German troops to seize northeastern France and surround Paris. They demand the release of Napoleon IV and the surrender of rebel forces. Germany organized a new royalist government with government officials and royalist soldiers who either fled Paris or were already in northeastern France.

Korea claims the Chinese throne for itself and launches an invasion of Manchuria.

The Solidarity Alliance in France manages to rise up with 60,000 members and seize the Principality of Monaco and other areas near and around the Italian border.

A group of rogue French officers travel to Corsica and seize control of the island, reclaiming it for the French Nation and request French support and recognition.

Germany reinforces the troops in northeastern France will 200,000 more troops, increasing the total number of troops to 350,000 combating in France.

With America and Britain sending troops to crush the communist riots, an alliance of Canadian Marxists is formed called the "Canadian People’s Liberation Army," a force of untrained guerrilla fighters willing to fight against the invading reactionary forces and free the Canadian homeland. Although impossibly outnumbered, the CPLA launches several daring attacks on American forces in the Rockies and detonates improvised explosives in major cities targeting Imperial Federation troops.

The Young Turks continue their insurgency against the joint Greek-Russian occupation forces.

Germany ups their troop numbers to 350,000 troops in northeastern France.

German troops in France dig in around Paris creating a frontline stretching from Caen and the English Channel to the Swiss border (this means heavy defenses to attacks).

South Africa tells the Dutch to bug off and demands the Netherlands withdraw all troops from the ZAR.

The Mau Mau Rebels, battered and at the edge of defeat, focus the rest of their strength on attacking and liberating the South African government’s concentration camps.

Numerous rogue Greek soldiers in occupied Turkey commit numerous atrocities against the local Turkish inhabitants, mainly rape, theft, and arson. Numerous Turkish activists demand Greece publicly apologize and give reparations for the Turkish Massacre that was committed by Greece in the Ottoman wars of the 1870s and 80s. The activists also demand Greece withdraw from Turkey and the lands they took from the Ottomans in the Ottoman wars.

The CLPA (Now known as the Confederation of Socialist Province of Canada) had launched terrorist attacks on the US in Buffalo and Detroit killing around 20 Americans.