It's the Year 1870 and the world is on the verge of war. In Europe, the French Empire under Napoleon the Third prepares for war against Prussia, which has been provoking Napoleon for the past few years. In the United States, President Grant leads the nation through Reconstruction, but faces opposition by white militant groups. In China, the Qing Dynasty still continues to reign, but in a weakened state after decades of humiliation and faces three rebellions. Meanwhile, in South America, the continent sees the end to one of the bloodiest wars in history as the forces of the Triple Alliance close in on the forces of Francisco Lopez.

Strikes can be given for things like open bullying of another player, editing events and responses without mod-approval and the like. If you manage to get three strikes, you will get banned either temporarily or permanently, depending on the kind of violation and how fast you got them. 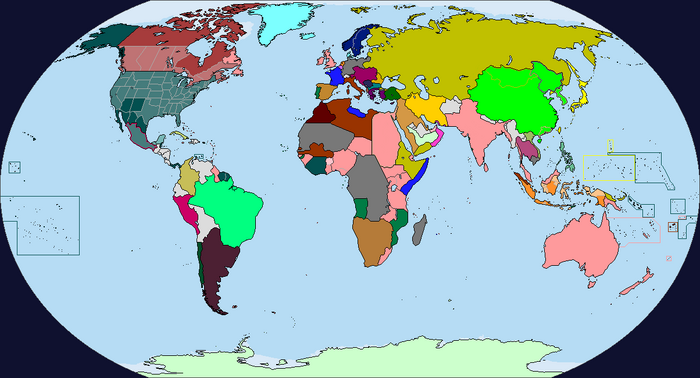 Sign up rules are: Can’t be two nations at once, you can only put your name by one. To claim a country, please put your signature next to the country you wish to be. If your nation has a puppet, protectorate, colony or whatever, then you may put your name under them and play as them as well as your nation, just put the subjugated state’s turn underneath its master's turn. If someone wishes to play a colony, puppet, protectorate, etc., then ask the master nation’s player first.

The Dutch economy enters recession as the vast expense of supporting a fleet of more than a dozen battleships weighs on the government. National debt balloons and the Dutch credit rating falls as it struggles to pay off its many loan<s. & Portugual experiences an economic surge, as foreign and domestic infrastructure development propel the economy. Commerce through and across South Africa sees increasing returns and the country's GDP/Capita begins to rise rapidly.

In southern China, the Chinese civil war rages, with the Qing forces, now with Japanese equipment and supplies, making huge gains against the nationalist forces.

The 1909 Serbian invasion of is highly successful. Serbian Armies hit Bulgaria in a major three pronged offensive. The first prong plunges into Sofia Province toward the Bulgarian Capital, successfully driving back the outnumbered Bulgarian troops there. Further south, a second army attacks to cut Southern Macedonia off from retreat. Finally, the last Serbian Army Corps attacks the Bulgarian forces in Macedonia. By the end of the year, Bulgaria has had 15,000 men encircled in Bulgaria, and lost another 12,000 to the fighting.

Italian Nationalist Terrorists detonate several explosives at border crossings with the Austrian Empire. In a sympathetic newspaper, they make clear their aim to conquer Trieste, wrest control of the Adriatic, and recover Trentino-South Tyrol. Relations between Italy and Austria sour considerably and many Italians support the idea of reconquering the lost territories.

The Wizard of Oz is written this year.

Bolivia begins industrializing quickly thanks to mining profits and a recently constructed rail line linking the interior to the pacific.

The Chinese Civil war yet again begins sees a turning point as japan switches support to the Nationalists and the nationalists make grant advances.

The Serbo-Bulgarian War Ends with the decisive capture of Sofia and the destruction of the remnants of the Bulgarian Armed Forces. 150,000 Serbian troops parade through the streets of the fallen Bulgarian Capital. In the Alexander Nevsky Cathedral King Peter of Serbia is crowned King of the South Slavs, by the Exarch Bulgarian Orthodox Church​

Retrieved from "https://althistory.fandom.com/wiki/The_End_of_Peace_(Map_Game)?oldid=1657179"
Community content is available under CC-BY-SA unless otherwise noted.