This game revolves around the idea that instead of all the powerful and developed nations appearing in Europe and Asia, with the Americas being discovered with less developed peoples, then being conquered and colonized - the opposite happens. The developed nations appear in the Americas, and then the rest of the world is discovered, conquered and colonized. The PoD is not clear, though it might have been to do with the way species moved as the supercontinent Pangea broke up. The game starts at the point of discovery of Europe and Africa. The calendar evolved differently so we start in the year 812, which is equivalent to 1700s OTL. The colonization race has begun.

There will be archives every 20 years up until 1000 G.A (Greater Americas year), from when it will be ten years. The first archive will be of eight years, however. 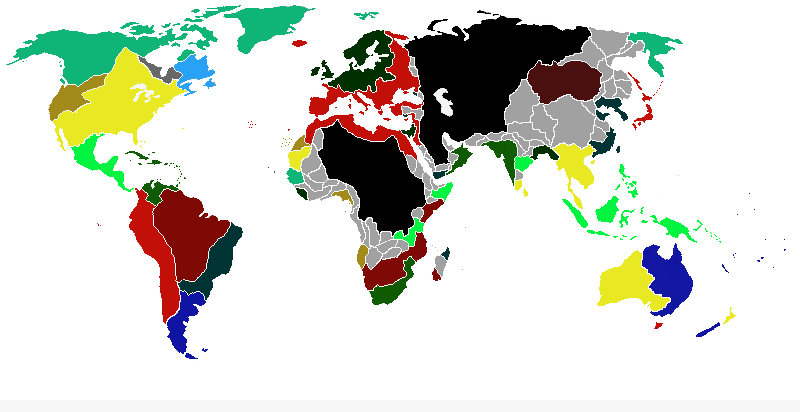 If you think any of us are being unfair, tell us: ForsakenPear, Imperium Guy, Monster Pumpkin, and IhaveSonar.

Map makers do not have the same rights as mods, the only one being the ability to edit the map.

The number of undiscovered countries goes down dramatically when three large empires in OTL China are discovered. They are the Qin Empire, the Tibetan Empire and the Urguyur Empire. The Mongols formally contact the other countries in North America, inviting them to their capital.

Just to clear some things up, the warmonger is NOT an actual cannon, the closest equivalent would be a machine musket. Look up the Puckle Gun to find out what it is. A ship armed with warmongers will still lose to a ship armed with cannons.

Starting in April, small groups of protesters appeared in the streets in Cuzco, demanding more religious freedom. Soon the protests spread to the United Amazon and Antillia. It spreads further north, and in the Aztec Empire and the Union of Greater States the protestors also want greater status for the native religion of the areas. By September the protests have reached Europe, demanding an end to the Jamesian-Catholic split. The only country not really affected is Patagon, as freedom of religions is already allowed.

Patagonian and Incan explorers travel south and explore OTL Antarctica on a joint mission. Due to the cold, they are unable to establish permanant bases and they leave. They will return to try to establish temporary ones next summer.

Incan Empire: The empire solidifies its control over its colonies. Special upgrades for the warmonger is being researched, but nothing has been done yet. Patagon is requested to send data about Trodovya to Incan explorers.

Brazil: Brazil cedes the Caucassas to Europe and conintues to expand Anatolia eastward, and the Inca are promised that the Holy Land will not be touched, and all Holy Land artifacts will be given to the Inca. All other colonies are expanded.

Aztecs: They continue to explore the interior of East Africa and continue expanding their settlements in Somalia and Zanzibar westward. Industrialization is now complete. They continue to expand its colony in OTL Calcutta west by conquering numerous Indian kingdoms.

United Amazon: The South African colony expands more Westward to make sure that the Aztecs don't try to close off the colony from the rest of Africa. Poverty has gone done in a new plan that will give land grants for free to poor families to start over in the Colonies. The military expands, and more factories open up to help make new military goods.

Patagon: The Samoan Islands are welcomed to the nation of Patagon, and schools, roads, and train tracks are built on them. Factory owners spread their businesses to the new territories. A complete chart of the Trodovyan coastline is sent to Cuzco. One of the island's system of government is a democratic republic, and it is noted throughout the rest of the Patagonian territories.

Brazilian Settlers, fearing attacks from the government, flee inland from the Anatolian colony, unintentionally expanding the colony. They now begin to demand independence. Arab nations and tribesmen band together and attack Incan and Antillian colonies. The Mongols expand west.

United Amazon: The Kenyan colony thought it would be funny to go invade the Aztec colony and burn everything to the ground. They did, but the po po caught them, and sent them to international jail, which is Antarctica. In United Amazon, all of the Amazon river and rainforest disappeared. Confused, the name of the country commited sucide. Needless to say, the new name is The Ground. The Offical Anthem is here.

Aztecs: The Aztecs establish a high-tech war machine that can do anything. It crushed all the East India Kingdoms and gives to the the Aztec East Indian Colony. It also causes all of East Africa to become Aztec.

Patagon: The high ruler of Patagon, in a drunken frenzy, suddenly becomes enraged at the Incans for demanding territory in Trodovya. He kayaks to the frozen continent, picks it up, kayaks back to South America, and proceeds to throw it on Cuzco, crushing all of the inhabitants. He later learns that the Incan emperor was on vacation at the time outside of Santiago, so he draws this picture and sends it to him. The entirety of the Kenyan colony, which had been imprisoned in Trodovya, breaks free and pillages the Incan countryside. Also, an alien space bat appears in Buenos Aires, does absolutely nothing, and leaves.

United Amazon: After learning that everything that happened last year was just a dream, the King keeps expanding the colonies in South Africa. The South African colony expands northward and tries to out expand the Aztec colony. More railroads are built, and factories are poping up more in South Africa.

The Aztecs continue expandin their East Indian and east African colonies. They begin industrializing and modernizing their colonies and begin to compete with the Amazonians over Africa.

Patagon: A new naval base is constructed on one of the Somoan islands, and factory owners continue to expand their businesses. New schools are built as well, and there is talk of a revamp of the nation's hospitals. More steamships are produced and armed with Incan Fire flamethrowers and cannons, as well as standard cannons and Warmongers. Another census is planned.

'I came too far to let this Map Game die!' Let's revive it. Also, I propose that we create a new system to decide how much we can expand our colonies (if your colony is this bug, it can expand so and so pixels). TacoCopper

Why would we have to roll it back to the beginning? I know I have sonar personally, and when I let him know the game has restarted he will join back. And I'm sure that others may join back as well. Monster Pumpkin 17:41, April 5, 2012 (UTC)

So that our new algorithms for expansion work. On the other hand we could just make up a revised version. All discussion on the talkpage now please. :P

Retrieved from "https://althistory.fandom.com/wiki/The_Greater_Americas_(Map_Game)?oldid=1353278"
Community content is available under CC-BY-SA unless otherwise noted.