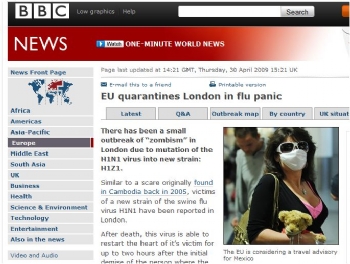 What if a human knew nothing but to kill anything in its path, without pain, remorse, guilt, discrimination? Nothing but pouncing upon the souls that came near it, to spread its madness? What if the very formula for this were contained in a virus spread through the very blood, sweat, and spit of the being? Well, we will explore this.

Rabies evolves in a rabid dog, creating the virus mentioned above, which proceeds to bite a man.

Local authorities had recently been alerted to reports of a madman that had stumbled randomly into a village, screaming in a tongue that simply could not be human. By the time authorities arrived, he had been restrained to a wall, after attempting to bite and claw at the villagers, but they had managed to restrain him without injury. The madman was loaded into a truck and hauled off to a prison.

The driver, eyes maintained on studying every twist, turn and pothole of the bumpy road, was running out of time. He had not slept much the previous night and his energy was draining away. The driver arrived at the top of a hill, and took a quick look at the next stretch of road, a straight, somewhat smooth stretch of road. Perhaps the driver could rest, just for a few minutes. There weren't any cars, after all, who would come out here? His eyelids grew heavy, and finally the driver submitted to the inevitable.

The driver was awoken like the crack of a gun, his eyes looking straight ahead to what he thought would be road, but instead he found a boulder towering before his truck. He then looked to his right, and saw a motorcycle parked on the side of the road, two common people dismounting. The two walked up to the window, the rolling down e window, as the man approached and said, are you fine? You look like you need sleep, as the other person headed towards the back of the truck, and soon the drivers ears drowned out the man talking to him, instead the sound of a sliding bolt coming from the back of the truck registered in his ears, then echoed repeatedly, growing in intensity with each echo. Then the man who just opened the back of the truck shouted, what is this man doing here, restrained? The former human let out a beastial roar and barreled out of the truck and into the man, pushing him to the ground, then biting him on the wrist.

By 11:00 AM local time infected had entered Kampala, the Ugandan capital, after police were dispatched to deal with reports of mass hysteria in the northern reaches of the city. By 1:00 PM the northern half of Kampala had fallen to the infected, and the Ugandan military and police had been dispatched in force throughout the city in order to stop riots, most concentrated in the north with no units providing a perimeter to prevent further spread to the south. By 1:15 PM the military and police forces opened fire on the growing horde, but this did little to prevent the spread, and by 3:00 PM the infected had reached the international airport on the shores of Lake Victoria, where many were trying to escape Kampala.

Retrieved from "https://althistory.fandom.com/wiki/The_Horde?oldid=1500121"
Community content is available under CC-BY-SA unless otherwise noted.