It's 1926, Lev Davidovich Bronstein has made his power in the Soviet Union gigantic.

That is, after he showed the politicians and leaders of the Soviet Union a secretly-edited paper of Lenin.

This edited paper of Lenin held a great amount information and criticism toward Stalin, as well as other lower-ranked Soviet leaders. Originally the paper had criticism of Trotsky, but after he obtained the paper Trotsky removed all criticism about him.

So after removing Stalin from power over the Union of Soviet Socialist Republics, he gave himself more power. He also reformed the Soviet motherland to be ruled more by the Soviet Councils, as he wanted to do in the Union.

But now, Trotsky's rise to power in the Soviet union we will see how the world reacts to this event, and how he will react to the world. 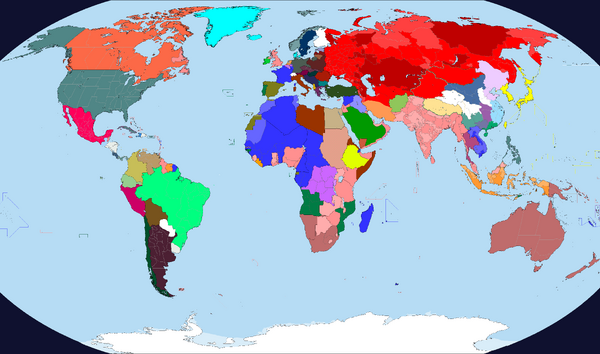 if a country has other countries under it with a dot it is a vassal/satellite state and normally the Player of the Ruling state rules all off them but they can be played by a user if he writes his name under it.

Trotsky announces his intentions for worldwide communist revolution, causing huge shock waves around the world. Governments become less reluctant and more willing to address the threat possed by the Communists to their nations and worldwide to devote more resources in the battle against communism.

The Locarno Treaties are signed in London.

In Poland, the public humiliation that the Locarno Treaties caused as well as the belief that Poland was abandoned by its Western Allies and that Poland would be sacrificed to appease the Weimar Republic were the contributing factors to the fall of the Grabski cabinet by the May Coup orchestrated by Polish War Hero Józef Piłsudski.

Flooding of the River Rhine strikes Cologne and 50,000 residents are forced to evacuate their homes.

New York City becomes the largest city in the world, taking the lead from London.

Hejaz is conquered by Nejd and Abdul-Aziz ibn Saud is crowned King of Hejaz. Reza Khan becames shah of Persia and is crowned Shah of Iran under the name "Pahlevi".

The French navy bombards Damascus because of the Druze riots. The first Lebanese constitution was established. The Rif War ended when Rif rebels surrendered in Morocco to French and Spanish forces.

The Communist movement in India unifies and grows in influence.

Soviet Union is able to push deep into Polish territory, taking control of Stanisławów, Tarnopol, Wołyń, Nowogródek Voivodeships and especially parts where Ukrainians or Belarussians reside, whom they tend to be more supportive to the Soviets, however soon German reinforcements arrive and the Soviets are pushed back from Poland by the German counter-offensive and slight advances are made into Soviet territory by German and Polish troops. Romania with Hungarian help manages to take over Tiraspol and even Odessa, which they lose to Soviet counter-offensives.

Iranian revolution largely fails to gather sufficient local support to hold against the Shah's forces and with no Soviet help arriving and with various radical islamist groups rising up and harasing the communist supply lines from the Soviet Union they are pushed entirely from the ethnic Persian majority areas into the Kurdish SSR, the Azerbaijani SSR and the Gilaki and Mazanderani ethnic areas along the Caspian Sea.

As German, Polish, Romanian, Hungarian and Russian soldiers fight side by side as brothers against the Soviet threat, this demonstration of soliditarity among Eastern European "brothers" is gonna serve the next generations as an example of what they can accompliss if they just put their differences aside.

In Mexico, the entry into force of anticlerical measures stipulated in the constitution of 1917 caused the Cristero War. The Cristero War erupts in Mexico when Catholic rebels attack the government, which had placed heavy restrictions on the Catholic Church.

In Greece, Georgios Kondylis ousted dictator Theodoros Pangalos. Then Pavlos Kountouriotis announced that dictatorship had ended in Greece and he was now the president.

The sudden death of popular film actor and sex symbol Rudolph Valentino at the age of only 31 years old caused mass grief and hysteria around the world.

The North Side Gang attempted to assassinate Al Capone, spraying his headquarters in Cicero, Illinois with over a thousand rounds of machine gun fire in broad daylight as Capone was eating there. Capone escaped harm.

The village of Rocquebillier in the French Riviera was almost destroyed in a massive hailstorm.

A democratically elected government was overthrown in Lithuania, with Antanas Smetona assuming power.

Nicaraguan President Adolfo Díaz requested U.S. military assistance in the ongoing civil war. American peacekeeping troops immediately set up neutral zones in Puerto Cabezas and at the mouth of the Rio Grande to protect American and foreign lives and property.

Right-wing veterans and the Republikanischer Schutzbund clash in Schattendorf, Austria, with two fatalities resulting. This leads later in a Revolt with 85 protesters and five policemen as fatalities after the police in Vienna fire on an angry crowd, mostly members of the Social Democratic Party of Austria, more than 600 people are injured.

Kuomintang takes over Nanking after heavy fighting and sets up a government there. Shanghai Massacre takes place where Kuomintang troops kill a number of communist-supporting workers in Shanghai. The 1st United Front between the Nationalists and Communists ends as they fight each other. Nanchang uprising takes place and the people's liberation army is established.

The Jericho earthquake strikes Palestine, killing around 300 people. The effects are especially severe in Nablus, but damage and fatalities are also reported in many areas of Palestine and Transjordan such as Amman, Al-Salt, and Lydda.

Early in the morning a ground fault gives way, causing the mine and part of the town of Worthington to collapse into a large chasm located in Ontario. The area had been evacuated the night before by most of its citizens after a mine foreman noticed abnormal rock shifts in the mine. However some people choose to remain choosing to ignore the mine foreman's warning as they wanted to gather their things from their houses resulting in 13 fatalities and 27 people are injured in the incident, as well as nearly 31 people missing.

Germany's debts reach an extraordinary high amount, because of the war with the Soviet Union and in the Rühr 2 500 workers go on strike demanding higher pay and stating "we aren't slaves of the French".

Most Finns feel that their independence its threatened by Sweden's ambitions to re-establish their empire, which brings them back memories of the old Swedish and Russian Empires whom oppressed them for centuries and they are absolutely terrified by this idea, with the Finnish government ruling out the Swedish proposal with great anger, however there are growing calls for union with Sweden from many ethnic Swedes in Finland, roughly 12% of the population and request their breathen at Sweden for their liberation for the Finnish government, the Åland Islands declare secession from Finland and proclaim their union with Sweden, creating their own army, consisting of peasants with inferior armament in order to keep the Finnish government out of the Åland Islands and request their breathen to intervene to support them.

Sorry for delaying the new turn so much, but i really need some help here, i can't do everything on my own, because i don't even have enough time, while i suck at making algo's too. ~Bear

Retrieved from "https://althistory.fandom.com/wiki/The_Red_Paper_(Map_Game)?oldid=1654321"
Community content is available under CC-BY-SA unless otherwise noted.