Start a Wiki
SCRAW PRESENTS
THE SEARCH FOR MORE MONEY 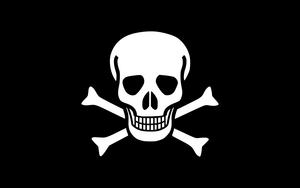 YO HO A PIRATE'S LIFE FOR ME

You may be wondering, "scraw, what the fresh hell is this shit?" Simply put, it is a game about pirates. You get to create and run your own pirate crew and operate in a fictionalized approximation of the Golden Age of Piracy in the Caribbean.

This is a highly experimental game. I've never done anything like this before and I don't think you have either. As such, the mechanics may be highly broken. If we learn this along the way, it will be a valuable lesson learned. Maybe someone will win instantly. I don't know. We are all here to learn. 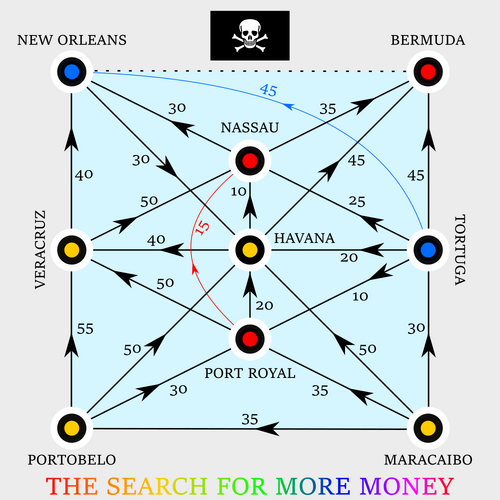 This is the map. Unlike a regular map game, it is not a representation of actual geography, but a chart which will assist in the operation of game mechanics. In truth, this is more of a math game than a map game. Each individual player is not represented on the map. Blue ports are French, red are British, and yellow are Spanish.

Every player will begin the game in one of the three central locations: Nassau (Bahamas), Havana (Cuba), or Port Royal (Jamaica). From there you may depart and travel anywhere as long as you follow the lines.

The black lines are pirate lanes/free travel. The blue line is the French naval lane and the red line is the English naval lane. If you travel on these two royal lanes you will have to fight the respective navies to complete your journey. A dashed line means no direct travel.

You cannot skip a port. This means no going from Tortuga to Veracruz without stopping at an intermediate port.

The great pirate captain Robert "Bingo Bob" Russell has died of syphilis. Somewhere in the Caribbean, he has buried a great treasure of 100,000 doubloons. His fleet is divided between his mistress, Missy Elliott, and his bastard Jack Horne. Your goal is to locate the GOLD and then escape with it.

You will find the gold by travelling from port to port looking for it, and for information that can lead you to it. The gold is buried at one of the nine locations on the map. Information will be relayed to players through a combination of mod events and messages from you. You have to beat the other pirates to the gold and avoid the imperial navies on the way.

The rules are simple.

How to create your pirates

Every player is to create a fictional pirate captain and the ships under their command.

Battles will be decided based on your choice of ships, men and money, and chance. I will create a spreadsheet which will allow for the quick calculation of battles. The mathematical values of ships will be established shortly, as mentioned above.

Battles will occur whenever players meet each other on a lane. The spot along the lane will be mathematically calculated by the speeds and distances already established. If you wish to avoid battle, you can use your luck factor for that turn. You may be located by an imperial navy or Bingo Bob's successor. You cannot avoid these actors; you must do battle with them. There will be no battles until turn 3 in order to allow everyone to depart from the starting point.

If you lose a battle by a little (specific amount TBD), you may escape and continue on your journey with depleted resources. If you lose by a middling amount (TBD), the winner has the choice to capture your forces or destroy them. If you are captured, you may continue playing the game as prisoners and attempt to liberate yourself later. If you are destroyed, you are eliminated from the game. Your captain will be killed either way and you will have to elevate a new character to the position of captain. If you lose by a high amount (TBD), you are eliminated from the game. All eliminations are final.

Four players may start any of the three central ports to begin the game. If more players wish to join, they will have to wait until other players leave the port. The game is capped at 15 players. Eliminated players will not be replaced.

Retrieved from "https://althistory.fandom.com/wiki/The_Search_for_More_Money_(Map_Game)?oldid=1779143"
Community content is available under CC-BY-SA unless otherwise noted.