OK everyone, here we go. Now, there are a good deal of map games on this wiki. We have the great old ones, Principia Moderni and Avaro. And then we have to great newer ones, like Vive la Revolution and Allies vs Entente. Those were good games that drew in a lot of players. (Really, I'm overdoing it with this stuff. Might as well cut to the chase.)

Anyway, aside from all that, those games and a couple of other ones had to be revised, rebooted, and restarted. So, I present to everyone the new game, The War That Came Early! It starts off in 1904, when Edward VII is assassinated by a German terrorist, starting an early World War. Now, in the Far East, Russia and Japan are fighting each other, so whose side will they take?

Well, I daresay, that, and many other things will decided in gameplay. 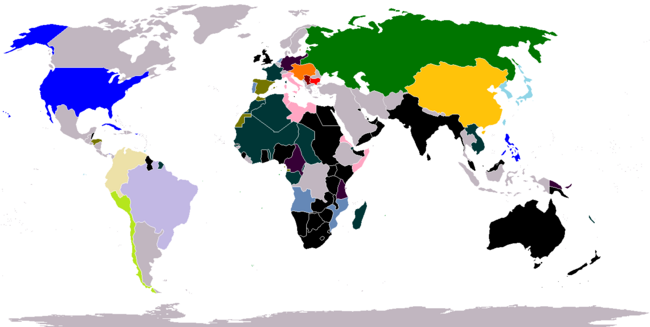 The World as of Now in This Great Game.

Greatest Extent of the Great War in This Great Game.

Central America and the Caribbean

The Great War has begun. Britain gives the Dominions the choice if they want to join the war or not. All the dominions join.

And then, everyone realizes the great shocker: the Russo-Japanese War is occurring in the East. Britain immediately demands that Russia joins the War. Russia has no choice but to declare war on Germany and its allies because Russia is an ally of France who is an ally of Britain.

And now what will happen? Well, that is all in the mystery that lies within the game. So there you have it! Send your troops in and fight one another! And be detailed! Detail is good!

And use the algorithm! I have created one! Sign up!

Let the games begin! May the Force be with us all.

island, the Russian navy is pressed by the Japanese imperial navy. Japan offers peace but at the price of Russian withdrawal from the whole Sakhalin Island and demand that Russia grants the whole island to Japan and their acceptance of Japanese dominance over Korea. Military hardware in the form of guns and food are sent to the uk to assist there efforts. The first gas artillery ammo containing mustard gas is produced and it will be put to use on the front lines within the next few months. Another small expedition is sent to guard the Kuril islands from attacks. the Japanese industry is slowly converted to a full military industry as more rifles and artillery pieces are produced and the propaganda machine goes into full affect as great patriotic slogans are posted all over the country and rhetoric about a place for Japan under the sun are encouraged by government officials. The military slowly starts to get more influence in the countries running with the blessing of the emperor. Taiwan is formally annexed as the Prefecture of Taihoku and the population is granted full citizenship within the empire similar plans to the same with Korea within the next 20 years are made, Japanese immigration to Taiwan is also encouraged by the imperial Diet..

How can you attack Bulgaria when you have to get through Germany, AH, and many other nations before you get there?

Germany urges parties of the war to go to the talk page so that the end of the war treaty can be signed and be done with.

Sims is no longer banned guys.

THE WAR MENTIONED FROM THE WAR IS COMPLETELY IMPLAUSIBLE! DO NOT MENTION IT HERE!

United European Alliance of Peace invitations are sent to all European countries, and the vote for the new President and Council of the Alliance is ongoing.

I don't think anyone is going to post. Should we start the next turn? TacoCopper

Come on, guys. Let's keep this map game alive. I personally really like it.

Can we seriously start the next turn,we have been on the same year for the past 5-7 days.

Retrieved from "https://althistory.fandom.com/wiki/The_War_That_Came_Early_(Map_Game)?oldid=1541802"
Community content is available under CC-BY-SA unless otherwise noted.