Theodore II of Cygnia (Albert Alexander Theodore; 2 June 1828 — 6 February 1885) was the 4th Emperor of Cygnia from the death of his father Alexander II in 1840 until his own in 1885 — he was the second-longest-reigning Emperor in Cygnian history, after his great-grandson, Ellory I.

Theodore II's reign began when he was but 12 years old. His father, Alexander II, died suddenly in 1840 after a short illness. As a result of his minority, during the first six years of Theodore's reign, Olivia, Princess Imperial ruled in his name as Regent. After coming of age in 1846, his constitutional powers were returned to him as mandated in the Regency Acts, and he was officially crowned on 5 May the next year.

Theodore married his maternal second cousin, Mary Frances Tennyson, in 1847, when he was 19, and she was 16. Their five children married into royal and noble families across Europe and in Mexico, tying them together and earning him the sobriquet "the Grandfather of Royalty". After Empress Mary's death in 1863, Theodore plunged into deep mourning and avoided public appearances for three years. As a result of his seclusion, republicanism temporarily gained strength, but in the latter half of his reign his popularity recovered. His Silver Jubilee was a time of public celebration.

Theodore II ruled during an era of great industrial, cultural, political, scientific and military change, and led Cygnia through the First World War against France, the Netherlands and Australie; his reign was also marked by a great expansion of the Cygnian Empire.

Theodore was born in the early hours of the morning on 2 June 1828 at Ellingham Palace, the second child and first son of Emperor Alexander II and Empress Josephine. He had one elder sibling, Olivia, but as male-preference primogeniture was in effect at the time, Theodore superseded her in the line of succession, and became the heir to the Crown. He was baptised as Albert Alexander Theodore in the Ellingham Palace Chapel on 3 July 1828. His godparents were his paternal uncles, the Duke of Adelaide and Prince Henry (later Duke of Liverpool), and his paternal aunt, Princess Augusta, then hereditary duchess of Brunswick-Wolfenbüttel.

Prince Albert spent most of his early life at Ellingham, where he was educated by private tutors. When he was 12 years of age, his father suddenly fell ill with tuberculosis and died on 6 October 1840. Albert, now Theodore II, acceded the throne only nominally, as because of his minority he was forbidden by the Regency Acts to perform the duties of the imperial office. Pursuant to the same legislation, his elder sister, Princess Olivia, was appointed Regent of Cygnia to fulfil the constitutional requirements of the monarch until Albert came of age.

At the age of 13, he joined the Imperial Navy as a midshipman. His experiences in the navy seem to have been little different from those of other midshipmen, though in contrast to other sailors he was accompanied on board ships by a tutor. He did his share of the cooking and got arrested with his shipmates after a drunken brawl in Saigon; he was hastily released from custody after his identity became known.

Theodore ceased his active service in the Imperial Navy in 1846, when he was declared of age. At the time of his assumption of imperial duties, the government was led by the Democratic Chancellor Harrison Redford, who at once became a powerful influence on the politically inexperienced Emperor. Theodore became reliant upon him for advice. Charles Greville supposed that the childless Redford was "passionately fond of him as he might be of his son if he had one", and Theodore probably saw him as a father figure. His coronation took place on 5 May 1847 at St George Cathedral. Over 400,000 visitors came to Swanstone for the celebrations.

At the start of his reign Theodore was popular, but his reputation suffered when it was revealed that he had made unflattering comments about Aboriginals in the Kaleep Territory. As at the time racism, at least towards Aboriginals, was beginning to become a sensitive subject in Cygnian society, left-leaning journals painted the Emperor as a "boy in his words and a crusty old coot in his heart." Though he later retracted the statement and published an apology, it took some time before he could fully recover from the consequences of this event. For example, in 1853, Theodore wholeheartedly threw his support behind Chancellor Redford's plan for a treaty with the Aboriginal people, but when Redford was assassinated the next year, republicans began a press campaign accusing the Emperor of involvement in the assassination. While Theodore was ultimately cleared of any wrongdoing, for months after Redford's death radical fringe groups called for Theodore's abdication, or even his execution. Redford's successor, Hunter Alston, published an article defending the Emperor and condemning radicals and republicans for their "treasonous rhetoric", which eventually stemmed the tide of embarrassment to the Emperor.

Theodore had met Mary Frances Tennyson, his maternal second cousin, as a child. The two soon became close friends, and throughout their adolescences they established regular correspondence with each other. In early 1846, Mary visited Theodore in Ellingham Palace, and thereafter Theodore continued to praise her. He and Mary felt mutual affection and the Emperor proposed to her on 8 March 1846, just five days after she had arrived at Ellingham. They were married on 8 May 1847, three days after his coronation, at St George Cathedral, where he also crowned her his Empress.

Throughout his reign, the Emperor's full style and title were: "His Imperial Majesty Theodore the Second, by the Grace of God, of the Empire of Cygnia and Her Realms and Territories Beyond the Seas Emperor, Commander-in-Chief of the Cygnian Imperial Armed Forces, Head of the House of Stuart-Campbell, Defender of the Faith."

As Emperor, Theodore II used the imperial coat of arms of Cygnia. 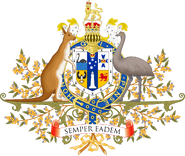 Imperial arms
Add a photo to this gallery

Retrieved from "https://althistory.fandom.com/wiki/Theodore_II_of_Cygnia_(Joan_of_What%3F)?oldid=1636834"
Community content is available under CC-BY-SA unless otherwise noted.