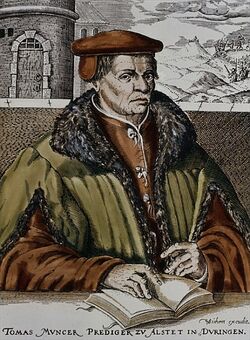 Thomas Müntzer was a German preacher and the most prominent leader of the Restoration movement in sixteenth century Germany. Inspired by the work of Martin Luther, Müntzer began to develop a more radical agenda for social and ecclesiastic change, which has been encompassed under the banner of the Restorationist Church.

Müntzer was born in Stolberg in 1489 to a moderately wealthy (but by no means noble) family. He attended the University of Leipzig and then the Alma Mater Viadrina (in Frankfurt an der Oder) before becoming a teacher at schools in Saxony. The young Müntzer’s ecclesiastic interests, however, drew him to the ministry and he would soon be ordained as a priest in Brunswick. His early sermons were noted for drawing on common topics that attracted other future Reformation leaders, namely opposition to Papal indulgences.

Müntzer first came into contact with Martin Luther, then the Augustinian provincial vicar, in Wittenberg in the autumn of 1517 - before the posting of the Ninety-five Theses. Another contact forged during his time in Wittenberg was Andreas Karlstadt.

Müntzer left Wittenberg soon after the Ninety-five Theses were posted on the church doors by Luther. He would find a position as a temporary preacher in Jüteborg, where he more deeply studied the works and lives of 14th century Christian mystics who had been popular in Germany - including Meister Eckhart, Johannes Tauler, and Henry Suso.

In 1519, Müntzer attended the Leipzig Disputation between the team of Reformers Luther and Karlstadt against Catholic Johann Eck. While there, Müntzer would get to know a fellow follower of Luther, Philip Melancthon, and would secure a recommendation for a pastorage in Zwickau.

In May 1520, Müntzer took over as pastor of a church in Zwickau, which was a prominent town near Bohemia known for being a mining and weaving center of Saxony. In his new position, Müntzer preached a radical message of equality of men before God, supported those who held to spiritual revelations (such as the Zwickau Prophets), and taught around themes of hardship and suffering. His teachings and association with the Zwickau Prophets (who had instigated a small riot in April 1521) eventually led to Müntzer being removed from his pastoral post that month at the urging of another follower of Luther, Johann Sylvanus Egranus.

Soon thereafter, Müntzer made his way to Bohemia, convinced to study more of the Hussite doctrine that had predated the Reformation. Upon learning of the execution of Martin Luther, however, the radical preacher decided to hastily make his way back to Saxony - but not until after he ensured his manifesto would be published in Prague.

The publication of Müntzer’s “Prague Manifesto” was as much the start of the Restoration as Luther’s nailing the Ninety-five Theses on the church door was the start of the Reformation. It came at just the right moment to excite the public imagination and to condemn the Roman Church and Holy Roman Empire. Without making an explicit attempt at power over the Reformation-era churches, it catapulted Müntzer’s name from a relatively unknown hanger-on to a leading figure within the Restoration - a term that would later be applied to his movement.

Briefly, it must be noted that in the period when Müntzer went east to Bohemia, Nikolaus Storch (one of the leading Zwickau Prophets) had made his way west to Wittenberg, where he met Philip Melanchton. There, Storch had convinced Melancthon, who was distraught over the execution of his mentor, of the importance of adult baptism and spiritual revelation. When news of the Prague Manifesto arrived in Wittenberg, Storch praised Müntzer’s work. This was shortly before the author himself was due to arrive in December 1521.