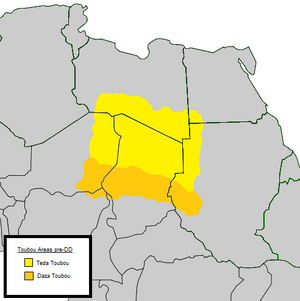 The Tubu or Toubou (Old Tebu: "Rock People;" also written Tibu, Tibbu, Tebu, Tubu, Tebou, Umbararo) are an distinct ethnic group that were spread across many nations, mainly in northern and central Chad, southern Libya and western Niger, but there were also some large populations in western Sudan and southwestern Egypt.

Their society was mainly clan-based, with each clan having certain oases, pastures and wells but since DD and the subsiquent exodus from drought and war hit areas, this has started to change into a more village-based rather than clan-based society.

All Toubou speak Tedaga, part of the Saharan subfamily of the Nilo-Saharan language family. They are believed to share a common origin, but speak now two distinct if clearly associated languages, Tedaga (Téda Toubou) and Dazaga (Daza Toubou).

The tribes were decimated by severe droughts in the Sahara and Sahel region, they began in 1984 and lasted until 1989, and by the civil war in Chad. Populations dropped from approximately 300,000 people to less than 150,000. The population of Teda Toubou hardest hit with the population numbers dropping from approximately 50,000 to less than 6,000.

Many thousands headed east into Egypt to the area around Lake Nasser, some stayed and survived the droughts of 84-89 and since 1998 the remainder based in the north Tibesti mountains joined the nation of Tamahaq.

Retrieved from "https://althistory.fandom.com/wiki/Toubou_People_(1983:_Doomsday)?oldid=887310"
Community content is available under CC-BY-SA unless otherwise noted.