The United Maori States, Maoriland, UMS, Te Ika-a-Maui, New Anglia, is a republic in the south Roasjoinn. It is separated from the Luxembourgois protectorate of New Zeeland by the Klare Strait. Its capital is Takapuna and has a population of around 3 million.

The Head of State is President Moka Kerehona.

The currency is the Maori Chert (MAC)

First inhabited by Polynesian tribes from Tonga during the 13th century, the Maori lived in virtual isolation until discovery by the Tawantinsuyu in the 1650s. Eager trading partners, the Tawantinsuyu would eventually supply gunpowder and muskets to its favoured tribes in the mid 1700s after they complained trade was been stolen by their neighbours. This would, as it did in many other Roasjoinn nations, spark the long and vicious 'Musket Wars' as the tribes used the new weapons to escalate their already bloody internecine feuds.

The First Musket War lasted from 1780 to 1834 and is estimated to have left 30% of the island's population dead. This was followed by a devastating smallpox epidemic. Whilst their neighbours to the south and the north continued their bloody musket wars the Maori of Te Ika-a-Maui cobbled a temporary peace settlement together. This agreement would slowly evolve into a united government.

Tribal loyalty remained strong however and the more powerful tribes soon dominated and fought for control of the nascent government. This led to repeated civil wars during the latter 1800s and early 1900s. It did however, hold enough stability to see off any prospective take-over attempts by the European powers. Its navy took a break from shelling itself during the 2nd Civil War to hunt down and destroy an Aragonese squadron which had been disrupting trade with the Tawantinsuyu. It could not however prevent the occupation of their southern neighbours by Luxembourg.

Beset by regular civil wars the architects of the 1920 constitution intended for the reformed republic to be totally balanced, no longer allowing a single tribe to dominate the entire country, and therefore removing a chief cause of violence. This has had a great effect on lowering tribal loyalty, creating truly national parties and creating a more egalitarian society, however is widely commented that it has also neutered government. Indeed the government is so finely balanced that any real change is often unachievable without the direct intervention of the President.

The current president is Moka Kerehona. He acts as both head of state and as head of government. Many reformers would like a division of roles but the current deadlock of government makes reform almost impossible. 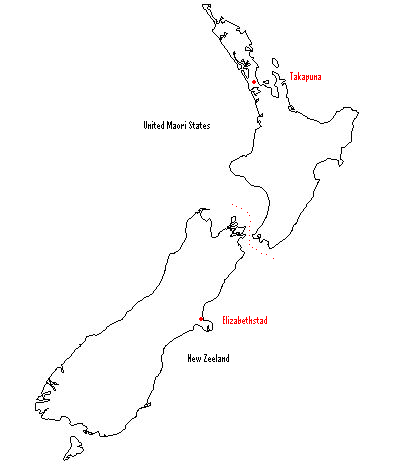 Retrieved from "https://althistory.fandom.com/wiki/United_Maori_States_(The_Kalmar_Union)?oldid=1167832"
Community content is available under CC-BY-SA unless otherwise noted.