The United States presidential election of 1976 was the 48th quadrennial presidential election, held on Tuesday, November 2, 1976. Dark horse candidate, Former Governor Ronald Reagan defeated unpopular President Spiro in the primaries and narrowly defeated Former Governor Jimmy Carter in the general election by energizing his conservative base.  Although Carter gained traction as a political outsider, he came under fire for many gaffes. This was the first election since 1952 in which neither an Incumbent President or Vice President ran as nominees in the general election.

President Spiro Agnew of Maryland
Add a photo to this gallery

The Watergate scandal, as well as the rising inflation made incumbent President Spiro Agnew extremely unpopular. With Agnew having a 66% disapproval rating, and the Democrats nominating the charismatic Jimmy Carter, it became more unlikely that Agnew would win in a general election. In spite of this, he was widely expected to be the nominee. However, after opponent Ronald Reagan's upset in New Hampshire, Agnew announced he would no longer seek a full term in 1976, leaving Reagan as the presumptive nominee. 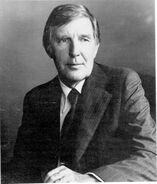 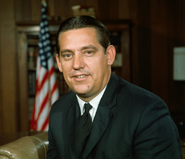 Former Senator 'Fred Harris of Oklahoma
Add a photo to this gallery
Retrieved from "https://althistory.fandom.com/wiki/United_States_presidential_election,_1976_(President_Agnew)?oldid=1504727"
Community content is available under CC-BY-SA unless otherwise noted.