In 1790, American Secretary of War Henry Knox concluded a grand treaty with Alexander McGillvary, leader of the Creek Nation. The Creek leaders were welcomed in New York with all the pomp and dignity befitting leaders of a sovereign power. McGillvary secured a vast swathe of land for the Creeks, largely within the borders of the State of Georgia. This was the first major treaty between an Indian nation and the United States since the US had adopted its new Constitution. It seemed to set the tone for the new republic's dealings with its indiginous people.

But Knox soon found that he lacked the military strength to enforce his promises. Before the ink on the treaty was dry, pioneers - settlers - squatters - were pouring into Creek territory with the full blessing of the Georgian government. The U.S. military, underfunded and undermanned, could do nothing to stop them.

POD: Knox consulted with President Washington and Attorney General Edmund Randolph. The three leaders were all of federalist temperment and were aghast at Georgia's open flaunting of United States law. They decided to "enforce with the gavel where we cannot with the bayonnet:" the case was brought before the Supreme Court, the first case of its kind in U.S. history.

The court of Chief Justice John Jay, also dominated by federalists, ruled in favor of the plaintiff in the landmark case, United States v. Georgia (1792). For failing to abide by federal law, Georgia was fined $100,000 (is this a realistic amount?), a large sum that Georgia was reluctantly forced to pass on to the squatters. The case set key precedents: Federal law now trumped state law, completely and unequivocally. Also, states could be fined for failing to respect the rights of Indian nations. The constantly cash-strapped U.S. government would often turn to this new source of revenue in the years to come.

Emir Timur chooses not to ride northward with his armies in 1395, deciding that Tokhtamish, Khan of the Golden Horde, is more valuable as an ally than a rival. The great empire of the northern steppes is spared. Timur instead directs his energies westward toward Iraq, Syria, and Asia Minor.

"[Better to consider] the organization of actual government by the seven seceded states as an accomplished revolution - accomplished through the complicity of the late [Buchanan] administration - & letting that confederacy try its experiment."

- Salmon P. Chase, Secretary of the United States Treasury, in a private letter to Alphonso Taft, April 28, 1861 (italics in original)

The debate within the Lincoln administration largely came down to two options: conciliate the South, the better to persuade more states from seceding; or, stick to the policy set forth in Lincoln's Inaugural Address and fight to keep federal control over federal property, including the beleagured Fort Sumter in South Carolina. Lincoln eventually took the latter course. But apparently, there was a third option, held by Sec. Chase but never really discussed: let the South go, and hope that they come running back eventually.

At this point, the Confederacy was brand new and consisted of seven states: South Carolina, Georgia, Florida, Alabama, Mississippi, Louisiana, and Texas. Montgomery, Alabama was the capital. Virginia, North Carolina, Tennessee, Arkansas, Missouri, Kentucky, and Maryland were still more or less committed to the idea of the Union, although many of their sympathies certainly lay with the would-be nation forming in the Deep South. Chase believed, apparently, that fighting the Confederacy would further alienate the border states.

I know that doing nothing while the union fell apart went contrary to Lincoln's nature. But in my mind that's what makes it a point of divergence. Suppose Lincoln and his administration had been persuaded to "let the confederacy try its experiment" - how soon before war would erupt? Would the remaining border states have seceded? What happens to slavery?

March 1861: Chase privately confides to Lincoln that he'd just as soon the Deep South goes alone, and good riddance to them. Lincoln at first is horrified at the thought that he would simply allow the Union to dissolve, but the give-em-hell policies advocated by Postmaster General Blair and his powerful family are also unpalatable to Lincoln, who does not want to be responsible for starting a civil war.

On March 29, Lincoln asks his Cabinet which of the three policies to pusue: surrender Fort Sumter (per Seward, General Winfeld Scott, and most of the Cabinet), rearm it and prepare for attack (per Blair), or simply do nothing (per Chase). The next day, Lincoln telegrams the relevant Navy commanders telling them he has decided not to rearm the fort.

On April 13, Fort Sumter falls. Most of the Union troops escape unscathed.

On April 15, delegations from Virginia, Maryland, and Missouri reaffirm their solidarity with the Union.

On April 17, Tennessee votes to secede.

I loved the potential of the Atlantic Islands project but (1) never took the time to contribute, and (2) don't like the direction that it took. (Massive changes to world geography, but the Swedes somehow still build forts on the Delaware? Really?) I don't know when I would do this or what it would look like, but I would love to revisit this fascinating map. Credit to Chris for the map, though I know he took the idea from elsewhere too.

It seems almost cliche but I can't find any examples of it: what would Washington or Hamilton have been like as military dictators?

A few what-ifs I've suggested on that message board

Make Rum, Not War: At the Paris Peace of 1763, the British allow France to keep Canada in exchange for several much more profitable Caribbean islands.
UAR Sticks Together: The Syrian coup of 1961 fails, and the United Arab Republic is able to expand to include Iraq.

The Grand Duchy of Hirland

This piece of althistory/geofiction was an entry for a flag competition: invent an island someplace near Britain and give it a flag (original). My flag tied for first place, but I'm more happy with the history and may expand it sometime.

The Grand Duchy of Hirland 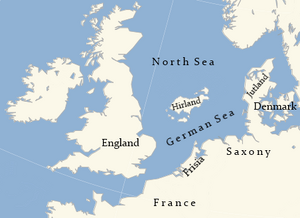 Hirland is located halfway between England and Denmark, between the North and German Seas. Its name is most likely a contraction of Old Norse Hjartland, Old English Heortland, and other cognate names meaning "Heartland." This probably refers to its position in the center of the seas, but some have speculated that it comes from Germanic pagan belief. Depending on the context, "Hirland" may mean the entire archipelago or just the main island.

The Romans knew about Hirland; they called it Dogeria after some long-forgotten indigenous name. Germanic people had long lived there in small numbers, but during the Migration Period they overran the island and erased most traces of its (most likely, theories vary) Celtic culture. The Hirish emerged as a separate people by the AD 500s. Many records refer to six kings of Hirland, each of whom ruled a part of the islands.

In the centuries that followed, the German Sea basin became a vibrant region of cultural and intellectual exchange. Hirland, right in the center, played an important role in the development of the "Mediterranean of the North." Beginning in England, Christianity spread rapidly through this interconnected region from the 600s onward. The new faith brought monasteries and scholarship and encouraged the consolidation of kingdoms. Hirland received a bishop in the late seventh century. Its first king, Oswulf I, united Hirland in 744. For a little while, Hirland ruled an empire after its kings conquered Jutland.

For a good five hundred years, Hirland was repeatedly conquered by various neighbors: Frisia, England, Denmark (twice), and the Empire (the Franks did get around to forming an empire in TTL, but it stopped at the Rhine because of the powerful Saxon state). Finally, in 1320 King Henry the Wise of Saxony took control of Hirland as part of a marriage alliance with the imperial family.

Under Saxon rule Hirland grew into an wealthy and important trading center. The Hirish port cities became architectural and cultural wonders. Chafing under Saxon control, the local nobles and great merchants formed a republic in the mid-17th century. Saxon efforts to regain this lost province occupied much of the rest of Hirland's history and involved conflicts with many of the powers of northern Europe. To make a long story short, Hirland ultimately became a monarchy under a branch of the Saxon dynasty. At first ruled by dukes, Hirland today is an independent Grand Duchy.

Hirland's flag reflects the traditions of seagoing flags in the German, North, and Baltic Seas in TTL. From the arms (heraldry developed more-or-less as in OTL), colors fly out in long strips. The civil ensign (at sea) consists only of the colors.

The arms of Hirland (Gules a stag in full course between seven caltrops Or) first appeared as a section of the arms of the King of Denmark in the 1200s - by that time the Franks ruled Hirland, but the king used the arms to show his claim. The main device is a pun on the island's name and "hjorte/hirsch/hart/hirt," meaning "deer." It is thought that the smaller symbols originated as crosses, not as caltrops, but the image of a stag leaping around a series of traps has proved an apt symbol for a small country avoiding the domination of its powerful neighbors. The caltrops' number varied but has been fixed at seven in modern times.

Retrieved from "https://althistory.fandom.com/wiki/User:Benkarnell/Ideas?oldid=1740554"
Community content is available under CC-BY-SA unless otherwise noted.