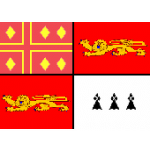 Hey, guys. I'm CookieDamage, and I usually go by 'CookieDamage', or mostly just 'Cookie'. I found the name while I was playing an expansion pack for the Sims 3 around 4 years back. There was an option to create a band for my sims, so I decided to do that. It gave me a bunch of randomized names for my band, and Cookie Damage was the first to show up.

I joined AltHist on July 23, 2011, and was briefly active for those few months. However, I only became more active when I began playing Principia Moderni II, starting on March 11, 2013.

I used to be involved in these map games, but am no longer due to resignation or the end of said map game:

And from the Map Game Wiki:

Retrieved from "https://althistory.fandom.com/wiki/User:Cookiedamage?oldid=1715869"
Community content is available under CC-BY-SA unless otherwise noted.