"IF YOU WOULD WISH TO HELP WITH ANY OF THESE IDEAS, PLEASE TELL ME!'

NOTE: This idea is not mine. I got the idea when I saw Mitro's one, which you can find here . You're free to comment on this ideas.

NOTE 2: Probably not all (hell, not even most) of the ideas in this page will ever become their own TLs. However, I will write down any TL idea I have here.

After a short feedback discussion with LG, I'm pretty happy that the Kingdom of Aragon is probably viable if it is small and somewhere in Ebro (apparently Tarragona isn't useful since it's too close to Barcelona to survive... I'm not sure on that, but I'll redirect Aragon southwards). I now have two ideas for Aragon (besides, of course, obsolete Tarragona): the Gandesa and Tortosa versions. They are named after their respective capitals. Of course, the third way would be merging both states (even though I'd rather not). 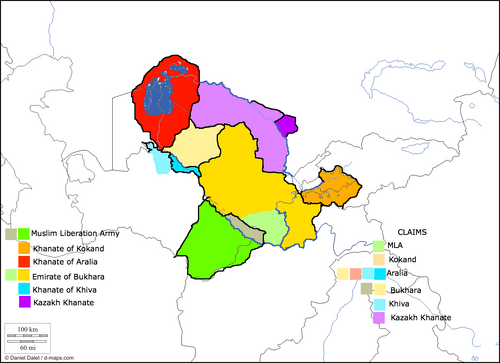 The An Shi Rebellion does not occur in China, and the T'ang are not weakened. Therefore, a Chinese Tang Empire survives until today.

(based on a blog idea)

Genghis Khan is a Kereit and henceforth Christian; his hordes preach Christianity.

The Babylonians set a small guard of the Euphrates. Before the Babylonian army became too drunk, an alarm that the water levels were lowering was uttered and Babylon is saved from Cyrus' armies.

Giuliano de'Medici survives the Pazzi Conspiracy. This eventually leads to a inter-Italian war and later French and Habsburg intervention. The war becomes an early equivalent of the Seven Years' War.

United Kingdom of France and Tuscany?

Caterina de' Medici becomes Duchess of Tuscany (as her half-brother wasn't born). After her marriage to the King of France and the birth of their son Lorenzo France and Tuscany unify.

Louis XVI's pride is not as hurt as on OTL, and when he is executed his son is made King under Robespierre's puppetry. This causes the War of the Vendée not to happen and Robespierre to kill less people, only continuing the anti-Catholic and anti-Conservative measures the revolutionaries had started.

(based on an article I read stating several areas wouldn't mind being part of Switzerland).

Switzerland annexes Lombardy, Savoy, Liguria and parts of Veneto, Trentino, Baden-Württemberg and Bavaria. This makes it one of the powers of the age.

The Karamanids wait for the Hungarian attack, which is also aided by a Holy Roman-sent army in order to save the Byzantines. The crusaders are able to take Varna. Later on, Morea (and Athens), Epirus, Byzantium and Trebizond also attack the weakened army, and are soon able to vanquish the Ottomans from Europe.

(This will probably be basically a parody of this sort of timelines, which I find implausible and cliché as hell and a place for me to write ASB stuff; not a serious timeline)

The Black Plague mutates into a much devastating form just after moving into the Muslim and Oriental worlds. This causes Europe, Native America and India or somesuch ro fight for the spoils.

Richard Lionheart recieves more support at taking Egypt and waits until 1192, when Saladdin died. With the Ayyubbids facing huge threats, Richard comes in and leads a very successful crusade against Egypt, which falls within a year.

The Greeks wait for the Turks to attack instead of marching through a desert to break the Sakarya line. Successful, they proceed to take Ankara and finish with a new victory crushing to the Turks.

That Byzantine door isn't left ajar and Byzantium survives in time for a wave of Christian reinforcements, which break off the siege and kill Mehmet.

Kingdom of Scotland and France?

King Francis II doesn't get ill and survives till much later, therefore having children with Mary, Queen of Scots. This later leads to a second "Hundred Years War" scenario with the French invading the English.

Frederick William, son of James I, survives and becomes King of Scotland and England. A more able ruler than his brother or his father, he is able to stop the Civil War by giving concessions to Parliament.

Albert, Victoria's spouse, doesn't die. Without mourning, Victoria doesn't expand voting nor does her modernise the military leading to a weaker UK.

22. Karalparakstan (after World War One)

27. Poland (expanded after World War One)

The Decembrist revolt is successful, leading to a constitutional monarchy and eventually a federation like in 1905's (see idea above).

Alexander I of Russia is born female, and named Alexandra Pavlovna. Pavlov, noticing her huge intellect, names her heir to the Russian throne, despite her having several male siblings. When Napoleon makes a visit to Russia to either accord an alliance or declare war, he falls in love with Alexandra, and they are married, bringing the huge French and Russian empires together. Soon enough, Prussia and Austria are forced to swear perpetual allegiance to France and Russia, and Great Britain loses in the Old World (although the New World remained under a fixed pro-British rule, as did the British Isles themselves).

Emperor Pavlov lives long enough to start an invasion of India. While suffering heavy losses thanks to the unknown terrain and too warm living conditions, eventually they are able to oust the British from India, thus crippling the British in the Napoleonic Wars.

The Battle of the Neva of 1204 results a crushing Novgorodian defeat, which leads Sweden to start annexing the Novgorod Republic and later on as far as the Urals, leading to a far more powerful Sweden taking part of the place of Russia OTL.

Reza Shah Pahlavi's armies fight more than in OTL and are able, with help from the montainous enviroment, to expulse the Soviets and Britush from their invasion. The Shah declafes an allianc to Nazi Germany cutting the USSR and UK's oil routes.

The Persiqn 1953 minister isn't deposed leading to a mantaining of the Shah, allbeit after a crisis with the US and UK.

Santander and Bolívar (alternatively Camilo Torres and Nariño) share the same ideals. Colombia doesn't suffers as huge of an internal crisis and becomes somewhat a superpower.

The Battle of Cartagena de Indias is a British victory.

The soldiers at the Banana Massacre in Colombia refuse to shoot the protesters and head for Bogotá so to establish a communist government. Later, USSR intervention has the USA marines not to intervene in the massacre. This leads to an earlier Pink tide in Latin America?

Colombia is invaded by the USA.

Bolívar agrees to go to Napoleon's coronation and doesn't meet either Alexander von Humboldt and Simón Rodríguez. This changes his political ideals and he becomes a staunch loyalist. As the leader of the anti-revolutionary army, he is able to defeat the revolts leading to a later Latin American independence.

Rest of the Americas

Fergusson shoots George Washington. A weakened Continental Army leads to a defeat in the American Revolution.

The Americans go to full out war after the failure of Jay's Treaty against the British. This leads to both a weaker Britain and the US in Europe and less fighting against revolutionary France as well as a weaker USA, or a British victory and the re-annexing of the US.f

Ful title of the King (for the lolz)

His Most Eminent Highness, King _______ of Houses Bourbon and Columbus, the Emperor of America, Admiral of the Ocean Sea and Viceroy of the West and East Indies, King of New Spain, of Perú, of New Granada, of the Argentine, of Chile, of Jerusalem, of the Haitis, Duke of Santo Domingo, of Oregon, of Luzón and the Philippines, of Quito, Venezuela, the Guayanas, California, Tejas, Utia, Nueva Orleáns, Misuri, Arkansó, Upper Luisiana, Upper Perú, of Cuba, of Puerto Rico, Count of Jamaica, of Acre, Lord Marshall of Habana, Chief Citizen of Cartagena and Mompós, Sheriff of Cumaná, of Punta Arenas, Lord Protector of Amazonia.

The long, lame names (:P) are due to the fact that, since Spain's territory in the Americas was far vaster than Portugal's, there was not a single name for the colonies (such as Brazil). Therefore, a single name can't be used, and the terms for describing regions (which are far less "magical" than those for single nations) have to be used.

The Jesuits are only weakened, instead of expulsed, by the Bourbon Reforms (maybe due to the Spanish keeping of the Misiones Orientales?). This leads the Count of Aranda's plan for the viceroyalties to become three dependent Kingdoms to occur, leading to a more powerful Spanish Empire

=Spanish Union and Empire of Spain

An expedition west by Madog ap Owain Gwynedd actually happens and leads to the earlier Christianization ( and the Celtification) of the tribes in eastern north America? (map to come soon)

Somehow Spain doesn't give Louisiana back to France in 1803.

The Nullification Crisis leads to an earlier Civil War.

The Spot Resolutions are voted into Congress and Polk is impeached or just falls out of favor. Andrew Jackson comes into power and reaches a deal less devastating for Mexico than that OTL.

War of the Americas

Rick Santorum goes in as presidential candidate in 2008 and attracts enough voters to be elected President. His ultra-right wing policies bring in Latin America's and the Middle East's leftists' fury. This leads to the 2011 College revolts in Latin America and the Arab Spring leading to a socialist revolution and then a 1983-like scenario.

Thorfinn Karselfni allows to trade weapons to the Skrælings together with milk (and later own pigs, horses and cows); this oeads to a more friendly Skrælings which don't expulse (and even help) the Vikings enough time for a large enough colony to arrive as well as smallpox. In result, when European explorers come a few hundred years later, the natives are far mpre advanced.

The French are not attacked by yellow fever and go over to recovering Haiti. Hence, a French American empire is possible.

Harrison lives for his full term, leading to the cancel of the Northwest Ordinance (something deemed inconstitutional nowadays) and a lot of the Northwest Territories deciding whether to be slave or free by vote. Soon, many northern states are also slave-allowing.

Retrieved from "https://althistory.fandom.com/wiki/User:Fedelede/Ideas?oldid=1412518"
Community content is available under CC-BY-SA unless otherwise noted.