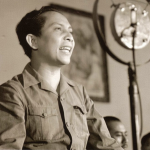 I'm only an ordinary Indonesian who loves alternate history on one side and K-pop on another. Simply being like that. I'm a Liberal Socialist whose supports the ideals of Keynesian economics and social liberalism. I am a cultural Muslim, but mostly secular. My views on Supreme Being is closer with Spinoza's concept of God and Laozi's teaching of Tao

I was a non-Marxist Socialist and a revolutionary Nationalist during my early youth. I admired some authoritarian figures, such as Soekarno, Lenin, and even Mussolini. However, I gradually transformed to become more liberal and open-minded. Sutan Sjahrir is now my political hero so far.

Retrieved from "https://althistory.fandom.com/wiki/User:FirstStooge?oldid=1674565"
Community content is available under CC-BY-SA unless otherwise noted.