I was assigned to be your "Secret Santa" for this year, and have kind of decided to go all out, at least for the wiki. I was inspired by your love for Italy and a possible Italian superpower. I didn't want to make a full-blown Italy-wank, but I did want to have some fun with a TL that I hope you'll enjoy, because I sure know I enjoyed making it.

Most importantly, Merry Christmas! I was quite happy to have been assigned to an old amigo, like you. Also, get more active, mate!

I created/borrowed a decent quantity of graphics for this gift. I really hope that you make use of them in the future. 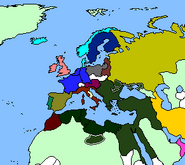 Map of Europe, Napoleone's Italy, ca. 1850
Add a photo to this gallery

This TL was inspired by you. Of course, it still needs a ton of work and isn't even close to being more than a stub, but here is what I have so far, all for your entertainment.

The Corsican independence movement exploded in 1755, as the nationalist Corsican leadership, under Pasquale Paoli, fought back Genoan forces and secured de facto independence for the nation. After a tumultuous history, the Corsican Republic would eventually be seized by French troops, working for Genoa. Recognizing that they would be unable to hold the island, Genoan Doge Marcello Durazzo sold it to French King Louis XV.

But what if Genoa didn't turn to France? What if Sardinia, eager to expand, decided to seize Corsica from Paoli's rebel government in 1763, when France was gripped by the Seven Years' War and Genoa was still reeling from its drastic loss? Welcome to Napoleone's Italy!

Following the invasion of Corsica by Sardinian King Charles Emmanuel III, an ardent expansionist, Paoli and his personal secretary and close confidant, Carlo Buonaparte, were arrested by Sardinian authorities, along with their families, and taken to the capital at Turin. A couple of years later, in 1769, Carlo and his wife Letizia, have their second son, named Napoleone.

Carlo has asserted himself as a member of the Sardinian nobility, and his son attends the finest academies in Turin. At the age of 15, young Buonaparte studies at the Accademia Militare di Modena, where he became a specialist in Field Combat. Buonaparte continues his studies and is promoted to a first lieutenant in Sardinia in a time of peace. This peace is shattered when France goes to war with Europe in the War of the First Coalition.

In the southern port city of Toulon, Napoleone served with the Army of Italy to prevent the French from seizing the port from the Coalition's hands. When French artillery was left under the command of an inexperienced young captain (in OTL, this captain was Napoleon Bonaparte), Savoyard Captain Buonaparte led an impressive forray that disrupted the French attackers to the point where they were forced to give up the important city.

Buonaparte was promptly promoted to the rank of lieutenant colonel. The Coalition then proceeded to Marseille, which had recently fallen back into Republican hands after a small Loyalist insurrection. Buonaparte led an entire regiment in the Battle of Callelongue, where he defeated the much larger forces of French General Jacques François Dugommier.

After this drastic victory, Buonaparte was named aide-de-camp of British Admiral Samuel Hood. After winning a string of victories that ensured Coalition dominance over the southern coast of France, King Victor Amadeus III of Sardinia summoned the victorious Buonaparte to Turin, where he was promoted to the General of Sardinian forces. Victor Amadeus ordered Buonaparte to seize Genoa and Parma, which were both sympathetic to the Revolutionaries, and Napoleone took the declining nations with ease, greatly increasing Sardinian power and prestige.

Meanwhile, at the border between France and the Holy Roman Empire, the Revolutionaries were making fast progress. By 1796, the Austrian Netherlands had fallen and parts of Germany were in French hands. In 1797, Prussia ended hostilities with the French, receiving the worse end of the deal. Later that year, Spain and Sardinia, not wanting their gains to be rolled back, agreed to peace with Revolutionary France.

Now, the only powerful state rivalling France was Austria. Under severe political pressure to perform or be guillotined, the Revolutionary generals of France fought extremely well and quickly were able to form an equivalent of the Confederation of the Rhine in Western Germany.

While Austria is extremely busy fighting off the French progress, Victor Amadeus III decides to conquer Austrian Milan. The war effort culminates with Austria facing a southern foe in Sardinia-Piedmont. The Austrian coalition in the south also included Tuscany, Modena, and Lucca. Napoleone's war efforts resulted in him conquering all of northern Italy, barring Venice. After these conquests, Napoleone's forces returned to Piedmont and prepared for, what they saw as an inevitable French reinvasion.

Victor Amadeus III, now 72 years old, then died in 1798 (having lived 2 years longer than OTL due to the lack of stress in his later reign). His son, Charles Emmanuel IV, was crowned king in Turin and then dismissed Napoleone from his military command in order to consolidate his power. This move proved to be extremely unpopular among the army of Piedmont-Sardinia, and as a result Buonaparte moved to overthrow the new despot.

The rebellion was easily won by Buonaparte. Recognizing that his power and sway among the nobility in Piedmont-Sardinia (who were considering upheaving Napoleone), the General (for he had yet to be coronated in Turin as King) marched his troops to war against the fading power in Venice. This war was fiercely and brutally contested, and was seen to be yet another test of Napoleone's muscle in the region. Eventually, however, the Republic fell to Napoleone, like so many nations before it.

After this successful conquest, the Conqueror settled in to Piedmont public life in order to secure his position - and his dynasty's position as the rightful claimants to the throne. As such, Napoleone di Buonaparte divorced his old wife, who failed to produce any heirs, and then married Infanta María Isabella of Spain, the daughter of the King of Spain and first cousin, once removed, to the King of Two Sicilies, Ferdinand I. María Isabella was only 15 years old at the time of the union, in 1804. She would go on to produce a strong male heir, who was named Napoleone Francesco Carlo Giuseppe di Buonaparte.

A few decades passed, and Napoleone's reign saw the transformation of Piedmont-Sardinia into an important nation with an impressive navy that could rival even Spain, by many accounts (especially after Spain lost its colonies in a more bloody and coslty series of wars in the Americas). In 1825, Ferdinand I of Two Sicilies died and Napoleone decided to press his son's distant claim to the throne against the recognized Francis, eldest son of Ferdinand I. Napoleone, who had plaid a vital role in securing the Papal election for Pope Leo XII against a French proposal, was granted access to move his army to seize Two Sicilies for his son, which is just what he did at the Battle of Campo Tenese.

In the meanwhile, Republican France had continued to place significant pressure upon Austria-Hungary, which ended up being attacked on all fronts: by France, Prussia, Russia, and the Ottoman Empire (and even a small Piedmontese force).

By 1850, the world is a dramatically different world. America never bought the Louisiana Purchase. France has retained its Republican government - and its corresponding excesses - and has lost its southern coast in exchange for most of Germany. This is the result of Napoleone's Italy!

Retrieved from "https://althistory.fandom.com/wiki/User:Octivian_Marius/Christmas_2014?oldid=1180409"
Community content is available under CC-BY-SA unless otherwise noted.