This is the official page for the Communist Party. Here you will be able to state your opinions and if you are a member, join in on voting on our issues.

Wiki politics started out as a government simulation created by Mscoree. In the first elections the Progressive Party gained most seats in the Senate, followed by Labour Party and the Independent Party.

Wiki politics are back with two new parties. The growing Centrist Party and the Communist Party.

You might ask yourself a few of the following questions:

The Party's principles, goals, and plans

We take our primary principles from

The Party doesn't actually have a hierarchy, but certain positions are needed to be given to members in order to help the Party to function properly.

Bold indicates that a position is unchangeable

Italics indicate that a position is subject to change

Here will be listed the issues of the party, which shall be voted upon by all party members.

We must choose an anthem

Ukrainian Anthem o the USSR all I say what we should do is replace the word Ukraine with something more about the wiki. Saturn (Talk) 02:02, June 16, 2014 (UTC)

Hero of the Communist Party Recipient

Because of Comrade Blocky's idea for medals being awarded to various comrades, we also added the Hero of the communist party medal. Only three people are nominated, and for a reason. Nominees are: SkyGreen24, Andr3w777 and Blocky858 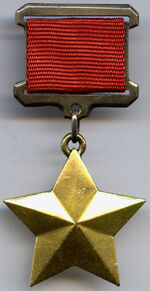 Hero of the Communist Party

Heroic feats in service to the Communist Party

Heroic feats in service to society

Note: You cannot vote for yourself.

Sadly, comrade Andy has become increasingly inactive as president and that is why I suggest that we hold an "election" on who should be the next president and vp candidates.

I have "un-nominated" myself and therefore I suggest comrades Blocky and Edge vote for someone else. SkyGreen24(Party,quotes)