This is the official page for the Libertarian Socialist Party. Here you will be able to state your opinions and if you are a member, join in on voting on our issues.

Another govsim another party. Edgeofnight has recreated the government simulation! Time to create more personal feuds (or are they called feudys now?) over a simulation!

You might ask yourself a few of the following questions:

The Party's principles, goals, and plans

The Party doesn't per se have a hierarchy, but certain positions are needed to be given to members in order to help the Party to function properly.

Bold indicates that a position is unchangeable

Italics indicate that a position is subject to change

This Party needs a department to produce advertising such as posters and the like, to persuade the populace that Libertarian Socialism is the right choice for AltHistoria. I have taken the liberty of creating a variety of slogans for such campaign posters:

These sound good, I believe the other members should see this before we make it official though SkyGreen24 12:14, August 14, 2016 (UTC) 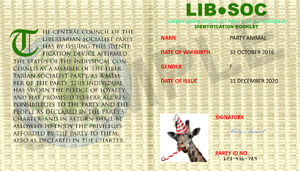 I have taken the liberty of creating the template for a LibSoc Party Identification Booklet. A sample is to your right. If you would like one, complete with an official LibSoc Party Stamp (not shown in the sample), please place a request below. — T I M (TSW • AH • MGW • Contribs) 06:49, August 15, 2016 (UTC)

You can be elected to only one position.

Retrieved from "https://althistory.fandom.com/wiki/User:SkyGreen24/Libertarian_Socialist_Party?oldid=1355415"
Community content is available under CC-BY-SA unless otherwise noted.