The United States presidential election of 2012 was the 57th quadrennial American presidential election. It was held on Tuesday, November 6, 2012. The Democratic nominee, incumbent President Barack Obama, and his running mate, Vice President Joe Biden, were defeated for a second term, losing to the Republican nominee, former Governor of Massachusetts Mitt Romney and his running mate, Representative Paul Ryan of Wisconsin.

Despite being the incumbent president, Obama was challenged by former Alaska Senator Mike Gravel, who managed to win the West Virginia primary. The Republican Party was more fractured; Mitt Romney was consistently competitive in the polls, but faced challenges from a number of more conservative contenders whose popularity each fluctuated, often besting Romney's. Romney effectively secured the nomination by early May as the economy improved, albeit at a persistently laggard rate. The campaign was marked by a sharp rise in fundraising, including from new nominally independent Super PACs. The campaigns focused heavily on domestic issues: debate centered largely around sound responses to the Great Recession in terms of economic recovery and job creation. Other issues included long-term federal budget issues, the future of social insurance programs, and the Affordable Care Act. Foreign policy was also discussed including the phase-out of the Iraq War, the size of and spending on the military, preventing Iran from obtaining nuclear weapons, and appropriate counteractions to terrorism.

The 2010 Census changed the electoral vote apportionment for the presidential elections from 2012 to 2020 in the states listed below:

In 2011, several state legislatures passed new voting laws, especially pertaining to voter identification, with the stated purpose of combating voter fraud; the laws were attacked, however, by the Democratic Party as attempts to suppress voting among its supporters and to improve the Republican Party's presidential prospects. Florida, Georgia, Ohio, Tennessee, and West Virginia's state legislatures approved measures to shorten early voting periods. Florida and Iowa barred all felons from voting. Kansas, South Carolina, Tennessee, Texas state legislatures passed laws requiring voters to have government-issued IDs before they could cast their ballots. This meant, typically, that people without driver's licenses or passports had to gain new forms of ID. Obama, the NAACP, and the Democratic Party fought against many of the new state laws. Former President Bill Clinton denounced them, saying, "There has never been in my lifetime, since we got rid of the poll tax and all the Jim Crow burdens on voting, the determined effort to limit the franchise that we see today". He was referring to Jim Crow laws passed in southern states near the turn of the twentieth century that disenfranchised most blacks from voting and excluded them from the political process for more than six decades. Clinton said the moves would effectively disenfranchise core voter blocs that trend liberal, including college students, Blacks, and Latinos. Rolling Stone magazine criticized the American Legislative Exchange Council (ALEC) for lobbying in states to bring about these laws, to "solve" a problem that does not exist. The Obama campaign fought against the Ohio law, pushing for a petition and statewide referendum to repeal it in time for the 2012 election.

In addition, the Pennsylvania legislature proposed a plan to change its representation in the electoral college from the traditional winner-take-all model to a district-by-district model. As the governorship and both houses of its legislature were Republican-controlled, the move was viewed by some as an attempt to reduce Democratic chances.

Despite being an incumbent President, Barack Obama was challenged by former U.S. Senator and 2008 presidential candidate Mike Gravel. Obama's reelection campaign mostly ignored Gravel's candidacy, however after a close loss an upset victory by Gravel in the Alaska caucus and the West Virginia primary, the President began touring states where Gravel was competitive. By May, President Obama secured the amount of delegates required to become the presumptive nominee.

Candidates with considerable name recognition who entered the race for the Republican presidential nomination in the early stages of the primary campaign included Representative and former Libertarian nominee Ron Paul, former Minnesota Governor Tim Pawlenty, who co-chaired John McCain's campaign in 2008, former Massachusetts Governor Mitt Romney, the runner-up for the nomination in the 2008 cycle, and former Speaker of the House Newt Gingrich.

The first major event of the campaign was the Ames Straw Poll, which took place in Iowa on August 13, 2011. Michele Bachmann won the straw poll (this ultimately proved to be the acme of her campaign). Pawlenty withdrew from the race after a poor showing in the straw poll, as did Thaddeus McCotter, the only candidate among those who qualified for the ballot who was refused entrance into the debate.

It became clear at around this point in the nomination process that while Romney was considered to be the likely nominee by the Republican establishment, a large segment of the conservative primary electorate found him to be too moderate for their political views. As a result, a number of potential "anti-Romney" candidates were put forward, including businessman Donald Trump, Sarah Palin, Chris Christie, and Texas Governor Rick Perry, the last of whom decided to run in August 2011. Perry did poorly in the debates, however, and Herman Cain and then Newt Gingrich came into the fore in October and November.

Due to a number of scandals, Cain withdrew just before the end of the year, after having gotten on the ballot in several states. Around the same time, Johnson, who had been able to get into only one other debate, withdrew to seek the Libertarian Party nomination.

A number of candidates dropped out at this point in the nomination process. Santorum withdrew after losing in to Romney in Iowa, Bachmann withdrew after finishing sixth in the Iowa caucuses, Huntsman withdrew after coming in third in New Hampshire, and Perry withdrew when polls showed him drawing low numbers in South Carolina.

Romney began to dominate the field, with Speaker Gingrich now running as the "anti-Romney" candidate. Gingrich's efforts to derail Romney were futile, and Romney won all of the other contests between South Carolina and the Super Tuesday contests.

The Super Tuesday primaries took place on March 6. Romney carried all but one of the states, with Gingrich won only in his home state of Georgia. Throughout the rest of March, 266 delegates were allocated in 12 events, including the territorial contests and the first local conventions that allocated delegates (Wyoming's county conventions). With Romney winning state after state, Newt Gingrich officially suspended his campaign on March 24, 2012. As a result, Mitt Romney was declared the presumptive nominee.

Third party and other nominations

Four other parties nominated candidates that had ballot access or write-in access to at least 270 electoral votes, the minimum number of votes needed in the 2012 election to win the presidency through a majority of the electoral college. 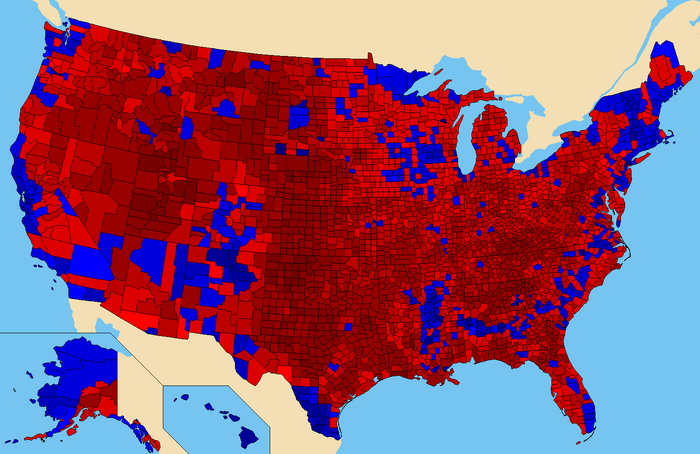