Welcome to my Sandbox! Here I gather materials and drafts for the future pages and notes in my timelines!

This is where I put the photos that I like and could use in the future.

Vikings in the New World

Colonization of the New World

The French landed on the coast of OTL South Carolina, and began to work their way south. They focused on colonizing the coast, and set up towns around Georgia and Florida. Eventually, they went inland and blocked England from moving south. It caused something of a colonial cold war, and had both countries frequently facing off about their borders. Instead of moving west through OTL Mexico, they wanted to move south through the rich Antillies.

They reached the coast of the Yucatan in the mid-1300's, around the time the Portuguese colony in the region began. Over the next 50 years, the barely expanded this colony, and focused on building up their defenses around the English border. They thought that the only threat to them in Belize was the Mayan tribes, but they soon met up with Portuguese merchants from just up the coast. They were able to hold defense, as Portugal had just been expelled from Ansuro, and was still weak because of it.

After seeing New England gain independence in 1496, France felt very threatened. With the Portuguese colony right on their border, things were mounting. In 1504, France attacked the coastal towns of "Mexico" and seized their capital. They were able to easily integrate it into their colony, as it was very underpopulated. They gave the northern part of Mexico to Anselia, and the bottom part to Belize. The renamed the region "Mexique", which became mostly French-speaking by the mid-1500's.

Division of the French Colonies

There were different names and cultures for each region of the French colonies in Erikson. The main region they colonized, which they named Louisiana, was a powerful region who quickly urbanized in the 1600's. But the region they colonized in the later centuries, which was in OTL Texas, became known as Anselia (after Francis Ansel, the French explorer). It was a mostly farming culture, and relied more on slaves than Louisiana did.

The Antillies colonies were even more diverse. While Avalon went to the British (OTL Puerto Rico), France was the first to colonize the region. The first place they reached, which was OTL Cuba, became known as Antillia. Much like Louisiana, it focused on urbanization, and became a very stable regional power. However, OTL Hispaniola became known as Kalinago, and became a hub for slavery. Most of the area is now desert, because their trees have been farmed to near-extiction.

The other two colonies in France were in the south. Mexique, which was once a Portugese colony, became one of the poorest French colonies. While the French overtook the Portugese in the region soon after they took it over, the king still treated them very poorly. He gave little to no aid, and many slaves were stuck there after they're freedom, as it was very cheap to live in. Belize, the other Southern colony, was a lot like Anselia. However, many of the people in the region tended to respect nature, leading to vast gardens and parks in public places. It's been described as the most beautiful French colony.

In the mid-1600's, when the Gold Rush began and New England expanded to the Pacific, Anselia was ready to sell a piece of their land to gain more riches than the gold was worth itself. They contacted the New English President, and said that they would sell him a large chunk of the Charlotte Desert (where little to no Anselians lived), for mining purposes. The President agreed, and bought it for 32 million New English Dollars (42.6 million US Dollars). However, the miners were able to build up large quarries, and the area soon became bustling, and worth much more than 32 million dollars.

After seeing the French land on the island of Antillia in the early-1300's, the English tried to stop them from moving their civilization westward. However, they didn't realize how small the archipelago was, and they turned out to be on the most westward island. Nevertheless, it served as a loyal staple of the English Empire, and rarely had any protests. This is because the people in the region owned vast plots of land, and could afford to pay the taxes and feed their family as well. Being a small island, it also served as a place for frequent slave labor. However, when the slaves were freed in the 1700's, most of them fleed to Patagonia, where they could begin a new life. While being a small island in the Atlantic, it is one of the richest (per capita) countries in both Erikson and Ansuro.

When the English had colonized all the islands southward of Avalon, they wanted to set up a permanent settlement in South America. Unfortunately for them, the Castillians had a monopoly on Ansuro, and would do everything to assure English rule didn't pass over the region. Ships secretly scaled down the coast, and landed on what are now the lower provinces of Patagonia. They weren't able to withstand the hot desert around them, and were forced to stick strictly to the coast for years. However, the Castillians couldn't either, and attempted to stray away from that area for about a century after it's discovery. The English, when the technology came out, were able to set up major port cites on the coast of Patagonia. These cities soon needed room to expand, and people from the poorer regions of England went to this virgin land to search for new riches. It was able to hold out, and it still does to this day. This also led the English to be one of the main colonizers of Estrell, when the time came.

Scotland got the shorter end of the stick on colonization. They traded with Denmark frequently, but never questioned where they got their goods. The English were able to figure out where Erikson was, while it took Scotland years to reach that fact. After realizing that there was a whole New World to explore, they sailed as far away from the English colonies as was sensible. They landed on the northern reaches of the Ansuran continent. They didn't do much, and only colonized in the first place to combat the advancing English in the region. After the Aragon-Scottish conflict occured in 1356, Nova Scotia was absorbed into Nuevo Aragon.

After hearing of the Venetian colonization of Erikson in the late 13th century, Genoa wanted to get a piece of the action. After sailing even farther south than Scotland did, they landed near the north regions of the Castilian colonies. After successfully navigating the southern reaches of the continent, they made a settlement slightly south of Castilian Brasil. After the Black Death rampaged in Europe during the mid-1300's, people fled to New Genoa, creating new settlements up and down the coast line. In 1465, after years of conflict, it was absorbed by Castile.

English Colonization of the Eastern World 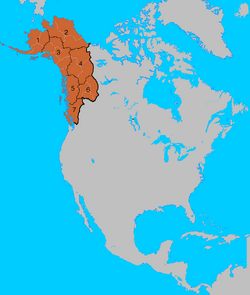 At the beginning of it's colonization, in the mid-1600's, the first colony was established in the Alaskan region of Aleyska, which was what Alaska as a whole was known as at the time.

List of regions and when the first colonies there were established: 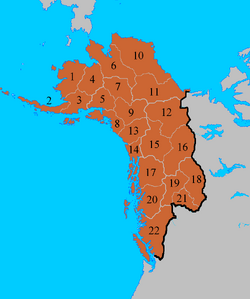 After gaining independence, they became extremely poor. They also attempted to expand to the Pacific, which ended up being a bad idea for them. It only made them overextend, while the Russians to the north lied claim on some of their Northern colonies. England didn't accept trade with them until the late-1700's, which forced them to trade by land, with places like Vinland to the north and the French Colonies to the south.

By 1559, New England had reached the Pacific, after 200 years of colonial stagnation. This allowed them to gain mining in the area, and open up more trade with China and India. However, while gaining a lot of gold in the area, they did not realize the huge potential of the region. In the 1600's, however, many people began to flock to the region for the gold and riches. This was known as the New England Gold Rush.

Trade with Vinland skyrocketed, and allowed them to import their gold all around the world. They put extreme limits on expansion, because they believed that the reason they were in an economic slump for all those years was partly because of it. They became allies with France, as they were both against England. The first official borders were established, which allowed Anselia to sell them a portion of their western desert land.

For the first time, New England was a power in the region, on par with Louisiana and Vinland. It traded with the major powers of Europe, and many countries liked it a lot. France was it's closest ally by 1700, with Vinland close behind. While having tensions with the loyal English colony of Avalon, it still frequently traded with the region.

Participation in the Great Wars

The modern-day flag of Avalon (used from 1698 to today).
Add a photo to this gallery

Patagonia originated in the early-1400's, in order to block Castilian colonization of Ansuro. Being mostly desert, the settlements were small towns on the coastline. But in the decades before the industrial revolution, in the late-1500's, England managed to expand much faster than they previously did. They were able to colonize the southern quarter of Ansuro, which was much more than originally expected.

After slavery was slowly being phased out, many freed slaves escaped to Patagonia in order to build themselves a new life. Because of this, it has a high African population. In addition to being one of the lowest populated English colonies, it was also one of the poorest. It relied on England for most things, until it was released as a free country (when England couldn't support it any more) in 1743.

The current flag of Patagonia; used from 1869 to today.
Add a photo to this gallery

For countries that I'm hesitating to put (or keep) in the timeline.

Government of the Eurasian Union

Retrieved from "https://althistory.fandom.com/wiki/User:Upvoteanthology/Sandbox?oldid=1239071"
Community content is available under CC-BY-SA unless otherwise noted.