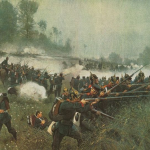 As of today, you appear to have created two articles: Empire of New Jersey and The New Democratic Republic of China. May I please ask the purpose of these articles. Are they meant to be part of a timeline, or are they the blueprints of another? -- NuclearVacuum

I have not done your algo, just because looking at the turn you haven't invaded yet, still preparing. Let me know as soon as you are invading.

Dont partition up Aryavarta. Firstly the pop. of Aryavarta is greater than Bengal, Punjab and Siam combined. The 5 mil of Myanmmar will not make a difference. Your population is 10-12 million not 25 million. The older estimates were not in line with the one we are following. The pop. of Aryavarta is around 55 million. Your conquest of Burma will make the Hindus the majority. Currently in Bengal, Hindus and Muslims are at 50-50%. You should become a secular nation. You, Siam and Punjab are at Tier 3 tech while Aryavarta is at Tier 4. Just wait till I return in 1662. I will share my technology with you people.

I don't think Oman would accept, considering they have held the island for 137 years and don't have any solid relations with Bengal. Dina Arobi/Mauritius is also a major sugar producer for Oman. Ultimately, the choice is up to Nate, but the profit gained from keeping the island seems to outweigh the profit from selling it. General534 (talk) 16:58, April 23, 2017 (UTC)

Do you have a discord?

Hi I am the France player in MDM. I just wanted to let you know I don't have any quarrel with Spain and would like to promote good relations between us. I would be interested in a non-aggression pact between us, and I would be willing to help Spain if you needed any help at the moment. If you want to talk I'm in the Wikia chat right now. Thanks, RIPmacmillerforever (talk) 05:47, April 19, 2020 (UTC)
Retrieved from "https://althistory.fandom.com/wiki/User_talk:Adolf_Coffee?oldid=1723742"
Community content is available under CC-BY-SA unless otherwise noted.