Treaty of Amiens is back

Treaty of Amiens is back on under new management. Please posts your turns again if you wish to keep playing Erizium (talk)

I just wanted to remind you that The Ashes of Rome Map Game begins tomorrow, August 1 (or today, depending on where you live) at 22:00 UTC.

No, I won't be continuing nor renewing the war with the Goths Erizium (talk)

We're currently having a major diplomatic conference in Toulouse, and I noticed that you weren't invited while the Jutes were. If you would like, I, Lombardy, as your ally, could represent you in the conference, and maybe work out a peace-deal with the Jutes. If you would like me too, you can post what you'd like me to put forward at the conference on my talk page. Genesaria (talk) 20:35, October 11, 2015 (UTC)

Can I be Japan? And if not, France?

Hi fire, These are the turns that you have signed up for this week:

If this time is bad for u then please swap with somebody else.

Greetings. Recently, you have uploaded a file on this site that is a duplication of another. Please keep in mind that many of the files found across Wikimedia have also been uploaded to this site — all under the same names and types. These files can easily be found by searching for the file's name in the search bar. If you are using the "visual" mode for editing and uploading, please be advised that you will be required to use underscores (_) instead of spaces when searching for a file (e.g., "Flag_of_Canada.svg" and not "Flag of Canada.svg" [do not forget to add the file type within the name]). In the event that the file you require is not already uploaded to this site, it would be very appreciated that you upload the standard file used on Wikimedia as a courtesy to current and future users.

Just letting you know that you've uploaded a second duplication onto this site. As mentioned to you yesterday, this is not allowed.

It should also be mentioned that you are renaming these duplications after your fictional countries. This is also not allowed. If a file is not of your own design, do not rename them.

I will not be replacing this duplication on your article (I will leave that for you to do).

Be advised that a third duplication will result in the temporary suspension of your account. Please try not to let this happen again. Thank you. -- NuclearVacuum

An way to settle things is to sign a non-aggression pact lasting until the end of the current Japanese regime, and a treaty that will divide China into two, with me controlling all territory south of Jinan and you controlling all territory north of Jinan. I'm too lazy to do math, but let's say you have 200 million people within your borders and 300 million within mine if the treaty is signed. You will also have to help us industrialise (but you don't have to help us modernise) and in turn we will help you fulfill ambitions in the rest of Asia. ~Candiesrgood

Deal in the "High Castle" 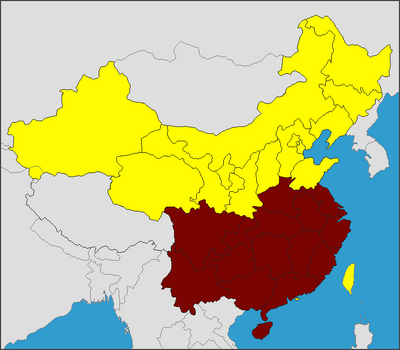 You're very welcome to join, please do. Currently we have a discussion up on the forums, so post any ideas and stuff there. If you want to make a proposal of some sort or wish to add pages etc, ask there or on the talk first and I'll give you the go ahead, sorry it's a restrictive way of operating, just in these early stages Imp and I need to establish some things and flesh stuff out before we allow people to make a bunch of proposals and things. But hey! Enjoy! FP(Now 10% edgier!!!) 21:44, February 4, 2016 (UTC)

Why have you gone from invading Viva to helping him. Like yesterday there was an invasion and now you are going lets support Viva? Person67 (talk) 07:36, March 8, 2016 (UTC)

Just a test message for my signature~
Hurry up, we're going to be late!

Hello, Fires! I've seen that you have taken up the responsibility of calculating algorithms in Emancipation, so I just wanted to notify you that there are now 3 to 4 algo requests (including mine). No need to rush them or start straight away, just wanted you to be aware. Thank you for taking the time to read this.

I'd happily nominate myself for the job of categoriser if you need. I'd probably be a spellchecker too. I get an inordinate amount of joy out of fixing people's mistakes. FPNow 10% edgier!!! 08:40, May 26, 2016 (UTC)

Hi Fires, the Game of Nations sounds very interesting, and I would love to join. If it so happens that Western Australia is still available when it comes to my turn, will it be possible for me to repurpose the Westralia articles from the Emancipation Map Game for GoN, or will I have to make a completely new set of articles? Thanks, — The Tim Man (TSW • AH • MGW • Contribs) 06:23, May 27, 2016 (UTC)

This is a notifcation to say Act of Ambition (Map Game) the map game which you signed up for has started and therefore you can now post your first turn on this new game. Person67 (talk) 17:55, May 31, 2016 (UTC)

Hey Fires if this is still available on my turn I would like to make a Super National Union (like the HRE) which consists of The (former) Kingdom of Hungary,the (former) Poland-Lithuania, and the (former) Ottoman Empire and I will only make one nation within it while others can still make nations as part of it.Is this ok? --The Epic Dragon (talk) 18:17, May 29, 2016 (UTC)

So would California have been apart of Mexico and therefore Mexico existed? And can I amke up my own revolution story?---Lieutenant113 (talk) 02:50, June 2, 2016 (UTC)

So I am going to participate in the next turn of GoN. But next Friday (June 24th) for a trip. I may not be on until that evening because we are driving at night in the car. So when will my turn be when we start? I do not want to miss my turn but I am not aware of when I will be on. Do you have s solution? Lieutenant113 (talk) 23:47, June 14, 2016 (UTC)

The Deal is Done

Ok Fires we made a deal, Lynx has gone, and I want my territory's back. Big Brother

We have a problem

We need you in chat, ASAP.

Since you're the one who runs the game, I would like to inform you that I'm dropping out of GON after discovering that it is unfortunately NOT an actual Map Game as I had been led to believe. You may feel free to delete both my claim and my nation from the "game", as I will likley not be returning to GON.

As the Head of Public Relations, I would like to inform you that today is polling day in Althistoria! Please head to your nearest polling booth and place your vote for the Rainbow Coalition and/or the People's Front! We must make sure the Dirigists do not achieve victory, for if they do, Althistoria may never be free again!

Could you leave me a full list of your Ultimatum plz

An Empire from Europe

Hi Fires,Can you help with Gaul,Hispania,Nortwestern Africa,and Germania in the Timeline I adopted,"An Empire from Europe you say... Do you mean the old Greek one?".Please reply on my talk page. ReclaimLandThatIsMine (talk) 01:22, October 29, 2016 (UTC)

Thank you very much for your support in my campaign for Lieutenant. For your efforts, I award you this campaign pin officially licensed by United Republic.

Hi Fires, I'd just like to test out this idea with you.

In GoN 2 (whenever that's meant to start) the planned earliest date is the beginning of the Age of Discovery (1492). However, for Cygnia to exist (and I really want it to since I've already put in a lot of work into Cygnia) a united England and France is required, and the only logical opportunity for that to occur is if England won the Hundred Years' War in the Siege of Orleans, which occurred in 1428 - 9.

The idea is for England to successfully conquer France, and then ultimately have France revolt against England before overthrowing the English monarchy and creating the French Republic. Essentially the French Revolution, but with the English monarch as its victim instead of the French one. Then, the English King would flee to Cygnia and thereafter the Cygnian War of Independence would take place.

Just letting you know that you recently uploaded another duplication onto this site. As mentioned previously, this is not allowed.

Since it has been a year since your last duplication, this message is simply a new warning. Please try not to let this happen again. Thank you. -- NuclearVacuum

You left rather quick. Sounds like someone didn't want to lose an argument...
-UR 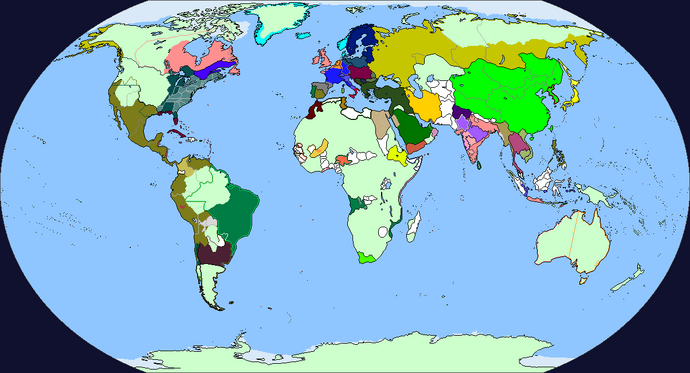 Here is a map of 1812 as the world goes round, don't worry I gots plans for Cascadia and California

I fucked up the page again.

Hey fires i'm gonna send you my culture just in case you lost it or something.

Build a statergic fort or forts in the newly taken lands of Arcadia. I don't know where just somewhere sensible to hold off another attack. Person67 (talk) 22:51, April 15, 2017 (UTC)

Now if I can only get rid of this damn catheter!

Can I adopt Vae victis? I find the idea interesting,and it appears you haven't contributed to it in a while.

Sorry about that. I haven’t done anything anyway, so I’ll just leave it be. I’ll edit my page now. I also really need to work on Pax Arabia…

Hey there i was thinking of a hireing you as a mod to take care of map game i had made called Risk!: Europe. You can also join in the game as a player if you like to.