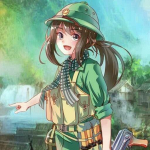 From your conversation with Cher (that's how I call 1234chernobyl), I can see you are a Vietnamese too. I can see why you're asking me about the history of Indonesia as if there is certain points that you can alternate the history in accordance with your scenario. However, it seems your timeline is a bit disorganized, so it is hard for me to decide at which point I should prevent colonialism in my country synchronized with your timeline.

The history of Indonesia is never simple. Nationalist historiography emphasizes two past empires on our history as a part of "our glorious past": Srivijaya (Sumatra) and Majapahit (Java). Srivijaya's influences were wide, even reaching Madagascar across the coast of Africa. I am a Banjar who lived southeastern Borneo and my ancestors were also the same ancestors of Malagasy people. Majapahit, on other hand, was not as wide as Srivijaya, but its cultural legacies left permanent traces across the archipelago. However, there were smaller past kingdoms and states across Indonesia, which their boundaries can not simplified with current administrative divisions. It is...a pretty much complex system.

The reason why I explained it to you is because the Vietnamese historiography is almost similar with the Chinese one, with past centralized kingdoms or states. If you want to write about Indonesia, you must understand which kingdoms were dominant in each island after the collapse of Majapahit in the 15th century.

Some kingdoms were let themselves to be subjugated by the colonial powers so they were not subjugated by their powerful neighbours. For example, the kingdoms in East Sumatra, Riau and Jambi were cooperative with the Dutch because they were afraid of Aceh's political dominance. Others, however, resisted the colonial powers so hard. Aceh and Banjarmasin were having potentials to stand as independent states if they played better games with the Dutch rather than resisted them.

However, the rest were depending on the Dutch for protection. Some, such as Kutai and Siak, even leased their lands to be extracted of raw oils and got richer from the tax return from the Dutch. The Dutch never subjugated them through wars or invasions, but with good diplomatic skills which benefited both sides (although the Dutch got a greater favor). The Indonesian states, like their Malay and North Borneo neighbours, would not escaped from colonialism because they could not, but because they did not want to escape at all.