ive been reading some of your new work and i must say i am interested. the reason that it caught my intention was i was planning on having the house of orange rule the British Isles later on in my timeline. My PoD is 200 plus years earlier then yours. i just wanted to congratulate you on an interesting start.

P.S. pardon my poor grammar its something im working on.

small question if your interested would you mind giving me a hand with ideas in the timeline? With Blood and Iron (talk) 11:47, December 14, 2014 (UTC)

In order to upload an SVG file, open up the file (presumably on Wikipedia/media) and click "Save Link As", not the usual save image option. From there you should be able to upload it normally to the wiki as you would any other file. Is the file you uploaded one you made? Because it looks like you uploaded it correctly, except you made the canvas size a lot larger than the actual flag. That is why there is a giant empty box around the white flag. Let me know if you need help cropping your image to a more reasonable size (or alternatively just enlarge the flag part a lot). I'd crop it for you, but I won't be on my normal computer until later. Anyway, I hope that helps, Mscoree (talk) 13:24, December 19, 2014 (UTC) 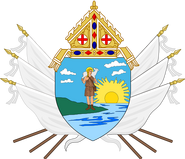 I cropped the images and did a little bit of resizing as well, since they were really zoomed in. The aspect ratio should be pretty much the same. Mscoree (talk) 20:12, December 19, 2014 (UTC)

Firstly I opened Inkscape and made a new document. I pasted your image in, and first altered the size (click on the image and drag the corner while holding the control key to keep the scale) so that it was more in line with coats of arms and flags on Wikipedia. Click on the image and you should see in the top center X and Y coordinates, followed by the height and width. I set the X and Y to (0,0) so that the image would be positioned in the corner of the canvas. Then I clicked File > Document Properties, and edited the height and width of the canvas to the values of the image itself. That's probably the most basic way to do this, and hopefully that gives you some ideas for the future. Anyway, glad I could help, and let me know if you have any more questions. Mscoree (talk) 23:03, December 19, 2014 (UTC)

I have a question Rich. Is it possible I can ad content to your timeline This is the Dream? I am interested in fleshing out the idea of the Koumintang returning to the mainland