Go right ahead. I'm quite flattered that a talented user such as yourself wants to adopt a couple of my articles.

I'm not they would work as full members, the other states share a common boarder and military interest in addition to their ideological partnership. Perhaps they could come to an agreement over trade and airportsVegas adict 19:22, March 12, 2012 (UTC)

I was thinking about this, I'm going to add the West African Confederation as a regional parter to the CAMC with them co-operating in international affairs with the USSR as well as with air travel via the African Airship Association if thats ok with you?Vegas adict 17:24, March 26, 2012 (UTC)

Your confusing the CAMC's claim to be communist with actual communism, with the posible exception of Eritrea there more socialist or even (In the case of Sudan) democratic socialist. There ideologies are not so different. Regardless I'm going to be starting the page for the 2012 Socialist International Conference soon and was wondering if you'd like to contribute.Vegas adict 19:34, March 26, 2012 (UTC)

I doubt Monrovia is going to join the new Liberia. I think the Monrovians earn a comfortable enough income as a member of the Safe Harbor Contract to join it. The purpose of such a union, in my opinion, is to improve the stability of the members involved. I must reiterate that I believe that Monrovia is stable enough on it's own.

No way that'd be workable with Cyrenaica.

Once this trash is done, and events further north have concluded, Cyrenaica - and Egypt too, I suppose - are going to expand further inland. No claims, except in a couple spots, overall.

Caer's going to keep fighting for a while yet. Expect more before it stops, this round.

Well, that really doesn't quite mesh with the maps already in place. Any of the versions, truthfully. On any of them, it cuts off territory already held, or outright lies inside one of them.

Looking at the one I've made, since it has a better resolution, how about we have them draw a line from where Egyptian control extends to on the Chadian border - on that little blip after it reaches its northern peak - and have it go roughly northwest? It's not that far off of what you propose. Works with both maps.

The line holds until it reaches where I roughly estimate the Greeks will get to, which is a line of some sort passing through the area around the point of 29,13, south of the ruins of Tripoli.

The Greeks have a harder territory to go through - Tamahaq really only has more or less uninhabited desert to worry about.

Smog, 14 degrees longitude cuts off territory on all maps - and is not at all what I proposed, lol.

Mind, I think that except for the small area between Egypt and Tamahaq, there is absolutely no need for such a thing.

This map is section from the newer version of the Africa map on my comp. (not done yet, waiting to see what happens with states in central Africa which at this time have horrid articles) It's more or less got both of our current versions that are up on the wiki added to it, as you can see. You're going to need to zoom in on it a touch to see this well. 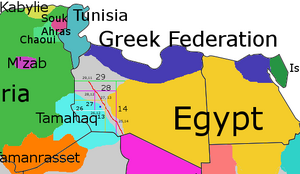 The Purpleish lines are the borders you're proposing. Like I said, cuts off territory. And, truth be told, makes the Tamahaq expansion into Chad, in a small area, make little sense territory-wise.

The green line is the 29th degree, for perspective. The Greek borders would end up in this general vicinity.

What I proposed to you was more or less the line I've hastily added in red, up to the 28th or 29th degree. The 29th, obviously, works out better, but you thought that went too far north, so we went to the 28th.

I've marked out where the red line crosses several points on the map, as well.

Basically, what I'd like is something more or less equal to that whole red line, to the 29th degree. Or, I suppose, the 28th, if that's what you'd prefer.

Actually, the 14th degree cut off some territory from both of them, lol.

Tamahaq's border in the east is already up to that line you drew, in the south. Way I figure it, it makes no sense for it to just stop there - that's why I did halfway on that little border piece rather than the tri-border location.

I guess I can take the 28th, but..... you can see, I'm sure, why it doesn't make much sense for the Greeks to be that far south, let alone Egypt that far west. It's only a small strip that Tamahaq would need to take, full of oil! Why wouldn't they want it? :p Don't make me beg, lol.

Really, I know it's further north than you want, but it does make more sense, all around.

Yes, about the lines you drew on the Libya map.

Not a bad map, but.... not perfect. I can see several places where it's off. But not bad for one with no context.

RASD stands for the "Sahrawi Arab Democratic Republic." You can see more on it on the Western Sahara page.

Between RASD - Spain does not hold that region - and Senegal is Nouakchott.

The previous borders, however, are still relevant, Smog. It's a question of context, you know? And a reference point for the new borders, of that makes any sense.

...Probably the best map I've seen you do yet, Smog. Good job. Roughly correct, I think, though I probably won't use it.

Really wish you wouldn't put up all those new maps, honestly. Quite frankly, most of them really look a little shoddy. No insult meant, mind.

That deal sounds fine. The Monrovians would like to at least coordinate their operations with the WAU's.

I apologise. If you could give me the page that my mistake was made upon, I may be able to provide a reason (the only DD edits I recall being minor spelling issues). Sorry. David Rain 11:14, April 22, 2012 (UTC)

That sounds fine to me. There may be reistnce, but it would be at a level that the likely well-funded Monrovian Arny can steamroll over easily.

Hey Smog. i was wondering if you were still active in 1983 Doomsday. Kind of a random question, I know, but im tring to see if I can get some of the older editors back into the project as its been kind of slow recently. Arstar 21:57, July 20, 2012 (UTC)

Hello. LG gave me the greenlight to bring back Doctor Who, a favorite show among many users on this site. The return of Doctor Who would entitle either bringing back BBC or creating a new broadcasting channel. Since the Celtic Alliance is currently the largest state in Britain, I thought it would be appropriate for the BBC (or whatever new station I make) to be hosted by the Celtic Alliance. I figured it would be best to contact you for permission to start the station (and Doctor Who) in the Celtic Alliance. CrimsonAssassin- "I have special eyes" 17:05, October 31, 2013 (UTC)

Hello! Due to your 6 month+ absence, and as per the Editorial Guidelines of 1983: Doomsday, I am hereby filing a request to adopt your Tamahaq, Maradikasa, Scotland, Ur Alba War pages and all of the affiliated sub-pages that go along with them. I am more than willing to allow you to keep them, should you chose to do so, but I assure you that they would be in good hands under me, considering my extensive edit count and experience with my own TLs and other community TLs (as well as some 83DD experience). For some examples of my work, please see:Finland, Korean War, and Livonia. Sincerely, Reximus | Talk to Me! 04:27, September 15, 2014 (UTC)

Hey, Smoggy. We've been doing some housekeeping and are moving the names of inactive admins to the Alternative History:TSPTF#Officers Emeriti list. I moved you down there because you have not been very active lately. Whether you see this today or years from now, you're always welcome to move it back if you still are / become active. Thanks, Benkarnell (talk) 23:11, April 11, 2015 (UTC)

Since you don't seem to be much present, i'd like to adopt this map you made so i can reput what was absent in it (but couldn't because it required your authorization). That is, of course, if you don't object.

Hello Smoggy80! As you are the apparent head of the WCRB Northern England Division, what is Cleveland's position on the proposal in the Talk Page by Nay Mate Woody, centred on the occupation of East Leicestershire and Rutland by the militia group The Sons of De Montfort in 2018, their subsequent secession from Newolland and the creation of the socialist microstate known as the Republic of Leicester? Seven years after the final defeat of the True British Army in the Great Rutland War, tensions must certainly once again be rising in the East Midlands.  MrWoodward (talk) 23:16, November 6, 2019 (UTC)

I would like to adopt the article -True British Army (1983: Doomsday).

I would like to adopt the True British Army (1983: Doomsday) page to create an ecanomic policy (I'm sure they will have at least some farms, several basic arms factories and a few penal slave labour camps) and to add to both the political and organizational aspects of the TBA.

I have asked EoGuy99, Smoggy80 and Fegaxeyl and if they either agree or don't say anything in 2 weeks I will assume temporary authority over it and add some more detail to it.

The unofficial TBA mottos and popular war cries were: "Bugger off darkie foreigners!", "No surrender to the IRA!", Put Zion under the flat iron!", "Better dead than red!", "No surrender to the GDR!", and "Death to fagots and Nancy boys!". They well summarized their toxicity racist, homophobic, anti-Communist and anti-Semitic mentally.
The opencast quarrying for ironstone at Ryebury Hill and Sidegate Lane, on land he owned on the south west edge of Finedon, Northants, ended in 1980; but restarted in 1987. It was one of the TBA's most prized assets.
Buckingham is surrounded by sand pits. They were run by the Penal Labour Commission.
The penal 'Terminator Chalk Mine' opened near Princes Risborough in 1992. It was run by the Penal Labour Commission.
Several of the TBA's founders had post atomic-holocaust PTSE and were no longer thinking logical, thus they were so brutal and militaristic after the war.
The lowest of all TBA military units is a locally recruited 5 man "parole unit".
The still anonymous ultimate heads of the Penal Labour Commission and National Security Commission were ranked as "Master Sergeants".
The TBA's homicidal destruction of the March 25th, 2007, Loughborough food riot; mid 2007 to late 2008 Brackley-Daventry-Long Buckby food riots, The early 2009 Towcester farmers' tax strike and the May 25, 2009, blacksmiths' tax protests in Daventry by both a Kettering based occupation Battalion and the numerous local TBA platoons in the protesting localizes.
Thugish policing policy.
Rudimentary local government structures.
Skirmishes with tribes in Oxfordshire and southern Buckinghamshire.
An official oath.
A local news sheet.

I would like to adopt the article -Scotland (1983: Doomsday).

I would like to adopt the Scotland (1983: Doomsday) page to create an economic policy (I'm sure they will have at least some farms, some basic food processing factories and a few fishing vessels) and to add to both the general political, national policing and local organisational aspects of it.

I have asked EoGuy99 and Smoggy80 and if they either agree or don't say anything in 2 weeks I will assume temporary authority over it and add some more detail to it. User:Todetode :. ~ Under the Hood, Connect to Basic information? ~ Todetode (talk). 22:08, July 10, 2020 (UTC)

Could I adopt Newolland? I'd like to have so I can legitimize another country named Leicester and revert certain reverts of things made by Nay Mate Woody on your page without your consent but who are realitic enough to be legit of course.