Stephanus, hi! We will soon be entering the vast world of PM3. I will become your neighbor, via my vassal state of Moldavia. You have 3 threats - Hungary, the Ottomans, and me.

Now, I can assure youu that I want to be friendly above all else. I will not go to war against you. The Ottomans will be busy defending themselves. Meanwhile, Hungary will look  to expand east, and take you from the game.

You are at the peak of your strength, before Ottoman or Russian dominance, but you cannot do it alone. I am also in a position where, if Hungary gets a few more states, I am in trouble.

To prevent this, I am trying to build a coalition that can stand up against Hungary. Culturally, we are both Slvic and have large Orthodox presence.Through systematic royal integration, we can become stronger together.

I was personally thinking of being willing to adopt Mihail I, your heir, upon the death of Micrea I, which you can post about ca. 1405. That way, you have the protection of Poland, Lithuania, Mazovia, and Moldavia all wrapped up (with Russian allies!) Just my idea.

I am proposing a coalition against the Hungarians to you, Bosnia, Venice, and maybe Austria to see if we can create a solid defensive pact to throw the hungry Hungarians off-course. Reximus | Talk to Me!<font color=red">Talk to Me!​ 07:37, January 16, 2014 (UTC)

I could see this being a possibility, however I am concerened about Ottoman threats as they did vassalize (later completely occupied) Wallachia in 1416, so Hungary, while a threat is not on the top of my list. Would I recieve any support against Ottoman agression? Also in the long run would their be any chance of a unified Wallachia-Moldavia?

P.S. My army consists mainly of peasant infantry that would be unwilling to attack other countries so I can only fight a defensive war, at least until I create a more centralized national governement (the enlightenment 1550-1650 will be my target) that has the power to raise a profesional army.Stephanus rex (talk) 14:50, January 18, 2014 (UTC)

Stephanus, I am willing (and happy!) to help you out with the Ottomans. If you recall, I am willing to offer you vassalization, and from there you can easily increase Moldavian-Wallachian relations (I may even later on let you play as Moldavia). If you are my vassal, you still play as Wallachia, but if someone declares war on you, they have to go through me, also. (A good detterrent!)

I would not worry too much about the Ottomans for now, there is a lot of internal pressure, and eventually a rise of the Byzantines will keep them busy for a while. Reximus | Talk to Me!<font color=red">Talk to Me!​ 18:59, January 18, 2014 (UTC)

Hey i am hoping and counting on your suppor for my war agains the Egyptian Sultnate. Please post under my turn if you are supporting/able to send troops/supplies etc! Thanks once again g greg e (talk) 03:04, April 15, 2014 (UTC)

Just wanting to know, when are you going to Edit the map for Harrapan?

We wait. Let them make the first move.

Seeming as the Austrians have finally decided to find a way to attack, it is time to crush them.

I need you and all your vassals to join the war full on so we can crush Austria.

While I know that our alliance was for just the Ottomans, I need your help here otherwise I won't be able to help you, further this way we can cement the alliance into a full alliance.

As soon as we win the war I can ensure you full support with all our current ongoing developments as well as war against the Ottomans, of course I will transport any and all troops via my fleet so that you can assist.

Also don't be threatened or bribed by Austria, they told three different nations (probably more) that they'd get all of Italy by working with them so they can't and won't fulfil any of their promises. As for threats, once we've dealt with them now they won't be a threat, we'll win and we already are winning.

Thanks for all help.

Hey man I'm inviting you into my alliance/organization in PMIII, the two members Prussia and Novgorod already allowed you to join. If you want entry, just reply to my turn in 1420.

Hey, whenever you are free, I would appreciate it if you could get on chat some time. I have an offer that might interest you.

Please could you switch nation? Rohan, Gondor and the Goblins are open, and I would like Isengard, I have a multitude of intriguing ideas for it, which need Isengard. It will be mutually beneficial. RSVP Local Mafia Boss (Talk) (Blog)

Please try not to let this happen again. Please do not re-upload this file. Disciplinary actions will be taken if duplications continue. Thank you. -- NuclearVacuum

I will probably be a Mordor ally. Anyway. Saruman created Gunpowder. I will go further than that. It will be good. Can you switch please? Local Mafia Boss (Talk) (Blog) 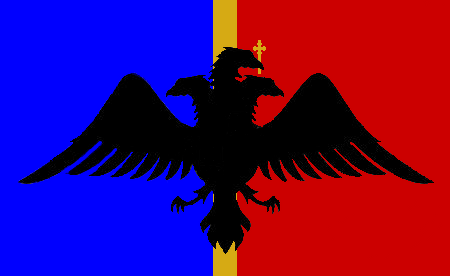 I recreated your flag earlier. It doesn't have a three heads like before but I think it is still quite good. It took me several hours so I hope you enjoy

i propose in the new AvA that India and whatever state arises from the ashes of the civil war i am preparing in Palistine align with one another in the post independence era as we will both be aiming to sustain a presence in the post war world, and will need to beware of iranian, and Soviet expansionist policies would you be up for a mutual alliance? With Blood and Iron (talk) 13:34, June 5, 2014 (UTC)

Yeah I need moneys cause of the whole economic crisis thing.

This is the gap i was talking about.

So wait, is that territory in Belorussian still being part of Poland.

Hi, I'm contacting all the major nations in Europe in PM3 to tell you about some royal marriage proposals available this turn, for three different royal families. On my turn there are currently fifteen people who are looking for a spouse, simply reply to my turn as soon as you can to reserve a person. I will be looking over the proposals to try to avoid incest (although a little incest never killed nobody haha), and if you'd like to see family relations yourself, feel free to check out this page, where the family tree is located. If you would like further information or my recommendations for a particular person, message me back with your available children and their ages and I will get back to you as soon as possible. Thanks, Mscoree (talk) 15:44, August 11, 2014 (UTC)

Need you to post for me until I get back, not sure when just fight rebels make alliances and trades upgrade military and economy please. Something popped up and I need to go.

Back no need for posts

Let me know if this is too much or what you want. I am simply showing what I want. Although some of my claims can be taken away I dont care we can discuss. The Italian Stallion (talk) 16:43, October 2, 2014 (UTC)

Hello Stephanus rex. I heard u offered help if I were to ask for it. Well this is the 1st time I ask. I am playing as Saxony in Principia Moderni IV and I wanna know how I could get to my coastline and get a colonial empire as quickly and efficiently as possible.Just asking for advice. thanksEljefe316 (talk) 04:49, January 28, 2018 (UTC)

We offer a hand of alliance against the marsinists in exchange we would like your assistance in taking down the republicans. (Man of hell) (Radical party of Hungary)

Hey so I’m no longer going to use discord cause personal reasons, but I’ll use this to communicate with you guys (the mods). So I had an idea for an event in 1951, where people start staking claim to Antartica and there is this big race for it. And I know there are already claims to it already, but we could possibly reset them or have them establish permanent research bases there (maybe even settlements if they are up to that), but I don’t know, what do you think? Cybermats, created by the Cybermen, they kill by feeding off Brainwaves 17:49, August 15, 2018 (UTC)

Hey, I didn’t ask for a mod response for my jet thing, just let me have this one. Also can you just stop hating on Hispania at every second. Cybermats, created by the Cybermen, they kill by feeding off Brainwaves 23:05, August 19, 2018 (UTC)

Siam diplomacy to Iberia\Spain: We want to trade some rice and fruit with you each year in exchange for some metal farming tools and better fishing boats\equipment. --Katie P Perry (talk) (talk) 00:43, September 14, 2018 (UTC)

Hey Steph, I’ve removed all the anti-Iberian stuff from my turn and I’m willing to work with you. Cybermats, created by the Cybermen, they kill by feeding off Brainwaves 15:45, October 2, 2018 (UTC)

Map Game Wiki can use more like you. The Map Game Wiki is an associate of the Althistory Wiki dedicated to the creation of map games- connect with other players and forge new worlds.

Hey Steph, Im Joseph, the Uluru player in PMIV. Im sorry to bother you but can you respond to my diplomacy? For the last few turns I have been trying to open relations with you but I haven't gotten a response to any of my diplomacy attempts. I wanted to build an embassy in your capital and to open trade and diplomatic relations.

Hi this is the Canada player in the end of peace. I just want to let you go I’m fully ok with you getting involved the war. Thank you with leaving a message. Have a nice day

Can i play as the Cape Colony?

Im on the discord as KKKOOL, can you invite me to the server, im on the alt hist wiki server now.