Kamarupa still exists, it's just smaller (Bhutan split off it). Now, with it being smaller and on the verge of civil war, it would actually be easier to vassalise or attack. 77topaz (talk) 03:27, October 19, 2012 (UTC)

Getting a proper port would be useful, which is why I was intending to buy a piece of land from or vassalise Bengal before it became a PC. Also, earlier, a war against the Mongols alongside China was intended, but China's player seems to have forgotten about it. 77topaz (talk) 21:23, October 19, 2012 (UTC)

It is possible to invade a player nation, but it would just be harder because of military buildup, allies etc.

Well we do have an non-aggression treaty so I'd rather not break that just yet. Plus the HRE war is still on-going so I'd rather wait for that to finish before dealing with the Timurids and the rest of India. But if Hindustan attacks you then you have my support for sure. But my complete support isn't for definite yet. The Caliphate's main concern is the Timurids and getting revenge on the HRE/Russia first. Have Bengal join the Caliphate though and you'll have my full support for sure, plus you get some support from rest of Caliphate too. VonGlusenburg (talk to Von!) 22:30, October 22, 2012 (UTC)

Well the Caliphate surely isn't going to last forever, its going to end with the Mahadi prophecy seemingly coming true but then it doesn't and the Caliphate collapses into civil war. But as long as we can get some revenge against Europe then I don't mind about the Caliphate ending lol. But yeah you'll get your freedom back eventually, as well as most of the Caliphate's Indian provinces. I'll leave India to you and I'll stick to Oman & ally with your Indian successor Sultanate once the Caliphate breaks up. Anyway, you have my support against Hindustan. VonGlusenburg (talk to Von!) 23:23, October 22, 2012 (UTC)

Okay you have my support completely against Hindustan now, our plans for Muslim world domination have changed. Fire away and we'll come running to help. VonGlusenburg (talk to Von!) 13:08, October 24, 2012 (UTC)

When the war occurs, you do the base bit & I'll amend where necessary. All you gotta do is get an old algorithm and change things to be for your country. They're not difficult, just when you start dealing with uncertain rules & the like. VonGlusenburg (talk to Von!) 14:46, October 24, 2012 (UTC)

See how you get on with the Caliphate's Indian provinces just sending military aid. I'd prefer the Caliphate not having to fight 2 wars simultaneously. VonGlusenburg (talk to Von!) 18:46, October 24, 2012 (UTC) 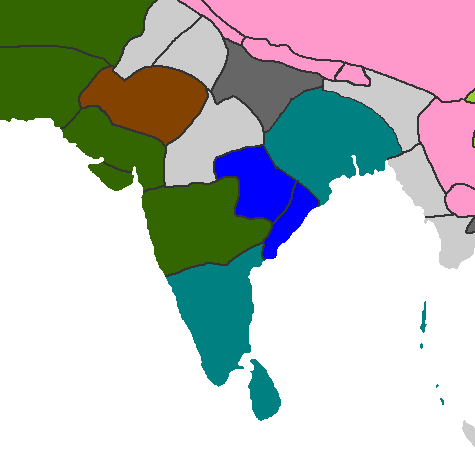 Hey, Tipakay. You're Bengal right? Would be interested in invading Hindustan with me? I'm from Europe and have a huge navy and massive army. If we win enough, you can have your color and I take the rest. Do you have friends who can help us?

The Caliphate will invade Hindustan with you as soon as you are ready. You have the full support of Deccan in assisting you invade Hindustan, as well as a lot of supplies & military aid from other parts of the Caliphate. Hopefully we'll destroy them this time. Invade this turn if you want, I'd like to get this over and done with soon. VonGlusenburg (talk to Von!) 00:28, November 16, 2012 (UTC)

Your Tibetan allies not helping you in this war? If we get 4 more points to our score, (we'd have 66, Hindustan 42) then the algorithm would give us 22.22% winnings from Bengal. Added to the 12% won in the last war, we get 34.22% which is enough to touple the Hindustani government and end the Hindustan threat, once and for all! So get your Tibetan allies to join! If it isn't enough, then I'll have the Caliphate send more aid. VonGlusenburg (talk to Von!) 17:00, November 19, 2012 (UTC)

I already said on the PMII talk page that I wouldn't be able to post much until December because I have exams... but you can have aid from Tibet. I might be able to get a turn up later today, but, first, enlighten me of the situation at hand. 77topaz (talk) 19:43, November 19, 2012 (UTC)

Okay Hindustan is defeated and their government is overthrown. Here is my idea of how we should divide India. This also includes that Hindustani vassal state in the centre of India rebelling and falling into civil disarray as it has only been a vassal of Hindustan a few years so they'd be pissed they just got dragged into a massive war. So yeah they rebel and go into civil disarray and the surrounding nations divide it up thusly. Meanwhile Imp continues to rule his new vassal state of Dravida, whose ruling Prince will be subordinate to the Sultan of Bengal and the Caliph. What you think? VonGlusenburg (talk to Von!) 02:44, November 25, 2012 (UTC)

So is Bengal going to join the Caliphate soon then? The Mahdi is nearly here and you did promise. You get Deccan province to control after the Caliphate collapses if you agree, otherwise we'll use force and you get nothing. VonGlusenburg (talk to Von!) 02:07, December 10, 2012 (UTC)

Mate I could do with knowing what your stance is towards Bengal joining the Caliphate. Will you join or not? VonGlusenburg (talk to Von!) 03:14, December 17, 2012 (UTC)
Retrieved from "https://althistory.fandom.com/wiki/User_talk:Tipakay?oldid=642589"
Community content is available under CC-BY-SA unless otherwise noted.