Vertigris - or sometimes, the Verdigris - is a confederation of small city-states in the prairies of eastern Kansas and Oklahoma. In many ways it typifies the communities set up by the survivors of Doomsday. The need to survive in the chaotic and hungry postwar years led to well-armed and authoritarian factions taking charge of each of the towns. Independence, Kansas emerged from the war and the postwar years more intact than its neighbors, and it thus became the strongest of the local city-states. The alliance that grew around Independence has evolved in recent years; its people have begun to see themselves as citizens and the confederation as their new nation.

Life in the Verdigris settlements is simple and tough. Most people work the land as farmers. They now live in small farming villages, clustered together for defense, either on land that they own communally or lease from one of the larger landowners. The towns are the center of Verdigrisian society and politics, but they are very small. The military dominates life in each town, going by different names like the Guard or the Sheriffs Department. The officers own a good portion of the farmland and control most government posts.

The Verdigris (pronounce the s) is a river in southeast Kansas and northeast Oklahoma. Its name comes from the Spanish Verde-Gris, "Green-Gray", presumably a reference to the river's coloration. The same colors can be seen in the flag, which was adopted in 2012.

The regime that developed into Verdigris was originally called Montgomery, and it was in effect an extension of the pre-1983 government of Montgomery County. Its influence extended over other settlements to the north and south, and this sphere of influence eventually became a true alliance; this alliance adopted the name Verdigris after the nearby river. The major towns in the nation - Independence, Coffeyville, Fredonia, Neodesha, and Bartlesville - all lie within the Verdigris River's watershed.

Verdigris is composed of nine city-states, plus some smaller affiliated villages and a few allied nomadic groups, located along a north-south axis that roughly follows the Verdigris River in southeast Kansas and northeast Oklahoma.

Verdigris is a loosely knit confederation of city-states dominated by the capital, Independence. Each of the various towns governs itself according to its own distinct traditions. Some are democratic republics, others are absolute dictatorships, and most fall in between.

The Council of Verdigris is the governing body. It meets three times a year. It is made up of several leaders from each of the nine member towns, with the number of votes of each town in rough proportion to its population. A few smaller villages not affiliated to any town, along with one or two nomadic groups, also send delegations, each with just one vote. The Marshal of Independence is ex officio President of the Council.

The Council has gradually named some officials to serve the alliance year round. First among these is the Secretary of State, a position created in 2012. The Secretary's main responsibility is to act as somebody that other powers can communicate with when the Council is not in session. His role has expanded somewhat, and he carries out some of the functions that a general secretary would. Other officials include a Treasurer, a Postmaster, and a Chief Archivist.

Each town also has its own judiciary, for the most part very underdeveloped. The District Court of Montgomery County, which consists of the judges in the town of Independence, functions as an appellate court.

Independence itself has a system that's typical for the Verdigris valley. It has a military government under the officers of the Montgomery Guard, an armed group that took power in 1986 and put down roots in the community. Its unelected leader has the title of Marshal. But there is also an elected, three-member Board of Commissioners that has recovered some power in recent years and can act as a check on the military. The Commissioners have the power to name judges and some other officials. They serve terms of three years, with one member up for election each year.

Neodesha, Kansas, is governed via direct democracy - for a select group of citizens. Only those people who lived in the town before 1983, and their descendants, have full rights. Refugees and other newcomers, who now significantly outnumber the original inhabitants, have fewer rights but have won a limited kind of suffrage since the early 2000s. Neodesha is also unique in that most of its territory is considered municipal property, commonly owned by the body of full citizens.

Coffeyville, Kansas, is an absolute dictatorship under its Chief of Police. The town government has had to resort to increasingly repressive measures to stay in power, as the growing population has increasingly come to expect some sort of civic rights.

Bartlesville, Oklahoma, has a mixed system similar to Independence, but unlike the capital it cannot claim any kind of continuity with the pre-Doomsday county government. It is ruled by a military leader who uses the title Washington County Sheriff. Citizens have the power to elect some lesser officials.

Fredonia, Kansas, was repopulated in 1995 and at first was governed as a direct colony of Independence. Its local division of the Montgomery Guard remains in power and defers to the capital for some matters, but it too has acquiesced to some democratic reforms.

Osage-Pawhuska, a newer member of the alliance, may be the most democratic in practical terms. It claims continuity with the prewar government of the Osage Nation, though most of its people are not considered tribal members by blood. Its elected head of government has the title of Principal Chief; it has re-established a small elected Congress as its governing body.

Wheat is the most grown food. Other crops include corn, soybeans, beans, peanuts, sunflowers, oats, pecans, rye, and hay.

The military is the base of power for Verdigris and indeed its reason for existing. Its main branches are the Army, the Air Force, and the Reserves.

The Army of the Verdigris has 1000 soldiers and is made up of the fighting forces of each member town. When combined, they are divided into a dragoon battalion (semi-mounted) and a cavalry battalion (fully mounted), each with 500 men, and again divided into ten companies of 100 personnel, with small units armed with machine guns, and some other light weapons unit. A majority of the arms used have been scavenged from abandoned military bases or purchased from the reformed United States. They operate no armored forces due to the cost, though horses have taken the place of armor for the most part. Indeed, one could mistake a Verdigrisian soldier for an 1800s era cowboy, except for the modern weapons that the soldier carries. Naval operations on one of the nation's various rivers are handled by the Army, which operates ten boats.

In their separate towns, members of the Army serve as police and security officers. Most serve part time, working as farmers or in other jobs when not actively training or patrolling. The bulk of their weapons were scavenged from police stations and SWAT units throughout the region. Typically, officers on patrol are armed with either the Browning Hi-Power handgun, or the S&W Model 15, a nightstick, and equipped with handcuffs. They have an assortment of weapons to use in situations of unrest, including M16 assault rifles, Remington Model 870 shotguns, and H&K MP5 submachine guns.

The Air Force has around 30 pilots. Cessna had a manufacturing facility in Independence for producing single-engine aircraft, including the 172 Skyhawk, the 182 Skylane, the 206 Stationair and the all-composite TTx. This factory was brought back to working order in the mid-2000s under the Cessna name. Aircraft are exported to Texas, the United States, the Lincoln Republic, and Utah. The facility had produced approximately one aircraft a day at its height; today it's only about 18 each year.

In addition, 14 aircraft are grounded in Coffeyville Municipal Airport and Independence Municipal Airport. Though most of them have been grounded since Doomsday, two aircraft, a scout and cargo plane, both operated by the military have been flown infrequently since the mid-2000s.

The Reserves consist of all males between the age of 18 and 35. They are required to perform service for two separate weeks per year. Services are staggered to prevent mass depopulation of jobs on certain days. To date, the Reserves have never been mobilized. Their main purpose is as a source of recruitment to the regular forces, as the best-performing Reservists are often brought into the Army.

A majority of military equipment used by the armed forces has been scavenged from abandoned military bases and converted civilian equipment. To keep common ammunition, the government has attempted to keep units armed with weapons using the same caliber or gauge, simplifying supply chains.

There are some light, medium and heavy machineguns in use, scavenged over the decades or discovered by scouts. These weapons are mainly used in support roles, but are attached to towing equipment, and a wheeled sled for cavalry to utilize in support.

Sabers and other bladed weapons are commonly used by cavalry and most foot soldiers are issued bayonets. Some are issued hatchets as tools as well as weapons.

Small quantities of explosives, mainly Molotov cocktails and gas bombs are used. There are some grenades manufactured using gunpowder and steel casings.

Soldiers of the Montgomery Guard, which rules Independence. 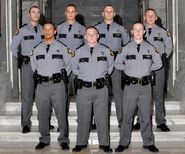 Troopers of the Bartlesville Sheriff's Department.

The Verdigris River near Coffeyville.

A Corythosaurus statue, acquired from the Sinclair Oil "Dinoland" exhibit in the 1964 World's Fair. It now rests in Independence.
Community content is available under CC-BY-SA unless otherwise noted.
Advertisement