Vinland is a relatively large nation in Northeastern Erikson. It is inhabited by Vinlanders, who were originally from Norway or similar places. It has a relatively high Native Erikson population, due to the fact that it borders the United Chiefdoms of Inuit. It was forced to be a colony of Norway in 1021, but gained independence in 1109. It now celebrates a diverse culture and a bustling economy.

"Archaeological studies and genetic analyses have indicated a human presence in the northern Yukon region from 24,500 BC, and in southern Ontario from 7500 BC. These first settlers entered Vinland through Beringia by way of the Bering land bridge. The Paleo-Indian archeological sites at Old Crow Flats and Bluefish Caves are two of the oldest sites of human habitation in Vinland. The characteristics of Vinlandic Aboriginal societies included permanent settlements, agriculture, complex societal hierarchies, and trading networks. Some of these cultures had collapsed by the time European explorers arrived in the late 15th and early 16th centuries, and have only been discovered through archeological investigations.

The aboriginal population at the time of the first European settlements is estimated to have been between 200,000 and two million, with a figure of 500,000 accepted by Vinland's Commission on Aboriginal Peoples. As a consequence of the European colonization, Vinland's aboriginal peoples suffered from repeated outbreaks of newly introduced infectious diseases such as influenza, measles, and smallpox (to which they had no natural immunity), resulting in a forty to eighty percent population decrease in the centuries after the European arrival. Aboriginal peoples in present-day Vinland include the First Nations and the Inuit." - [Source]

To learn more about the early history of Vinland, check out the Kingdom of Vinland page.

Around the year 1000, Leif Erikson set out to find new land. Leif's expedition first came to an empty, grey land that they called Helluland (“Flat-Stone Land”). As they were sailing southward, they encountered a smooth, forested land which they called Markland (“Wood Land”).

In 1010, Thorfinn Karlsefni, after hearing Thorvald’s reports of grapes in Vinland, led a colonizing expedition of 65 people. By the time they had stayed there three years, the colonists’ trade with the Native Eriksons had turned to warfare, and the colonists retuned to Iceland and got an arsenal of weapons to use for battle. These battles have since been known as the Wars of Foundation.

As a colony, there was a lot of progress made in exploration. After becoming a colony of Norway, there were over 1,000 settlers sent over to Vinland in the next 25 years.

In the 1190's, after the Vinlanders discovered the Inuit across the Helluland Bay, they were forced to get in a war. They lost, and gave the Inuit their own autonomous country. This was a harsh blow on Vinland, and ended the Age of Prosperity for them. They were forced to upgrade their military and tone down on their mining operations.

In 1214, the first case of what is now known as Inclino (OTL Syphilis) hit the far west town of Minnibakki. It spread as settlers returned to merchant hubs to pass on goods to others. The Vinlandic king at the time was forced to quarantine these towns, but it ended up killing 15% of their population. The commotion ended with a one year cut of trade to Europe, only to have it reinstated in 1221 (one year after that).

By the 1270's, when the Renaissance was in full effect, Vinland was considered to be out of it's slump, as most people had a satisfying amount of food. Although most towns in the far west were still in poverty, the king didn't care much for them. He focused more on the issues in European countries than in his own backyard.

They had a series of rebellions in it's western area, due to their people dying and most others in the state of late starvation. Luckily for the king and badly for the rebels, most died out from a second outbreak of Inclino in the mid-1300's.

From 1453-1456, a war was fought against Denmark-Sweden for the freedom of Vinland. To learn more, see Vinlandic War of Independence.

By the end of the Renaissance in the late 1400's, Vinland was a changed, stable, artistic kingdom. They seemed to be ready to face the rest of their years on par with the other powers.

The rebellions in the Western regions of Vinland had stopped years ago, but were still engrained in some people's memories. On top of this, the king was heavily taxing the people of Vinland, with no one able to stop him. The people wanted independence from the tyrannical reign of their current king. Their western territories seceded, which began the Vinlandic Civil War.

The new Vinlandic government was much different than it's previous rendition. The president of this new government put many reforms on expansion and war protocols. For example, he ceased the expansion of Vinland, and allowed the Chinese and New English to fill in the borders around them. He didn't want to get into more wars and lose more territiories than he already had.

Supporters of the king were almost non-existant, and only fought the new government in places towards the north-east of Vinland. 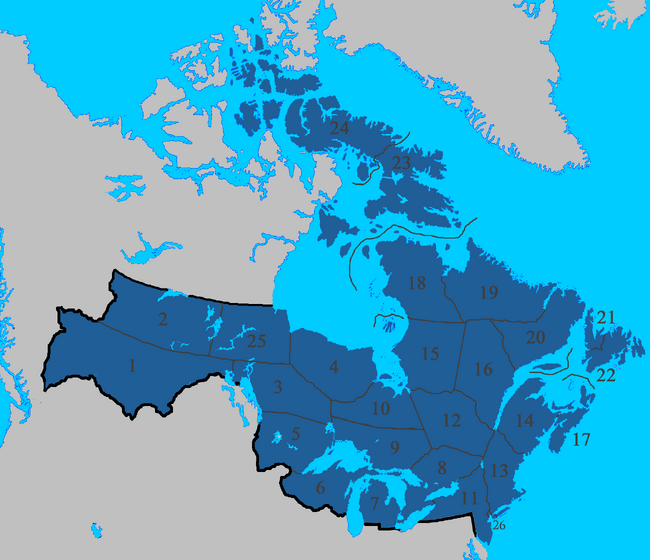 Although it's northern areas have about as many people as the central ones, it's only because of them being colonized early.

Time in Vinland is divided into four different time zones, each an hour apart from each other (save for the Atlantic time zone). To see more about time in Vinland, look at this page.

The Vinlandic government was based loosely off of the New English government, with a bicameral house instead of a unicameral. It is divided into two houses, with an equal amount of members of the high court residing in both houses.

Hus av menneskene, which literally translates to "House of the people", is a house made entirely of elected officials. It is based on population, which means that each division of Vinland gets representatives according to the amount of people in them.

Huset av staten, also known as the "House of the State", is a house, while still elected by the people, are ultimately controlled by the people of the other house. More to come...

TO BE FIXED SOON

The language of Vinland, officially, is Norwegian. But many people call it Vinlandic, due to the former area of Norway speaking mostly Danish and Swedish now.

Retrieved from "https://althistory.fandom.com/wiki/Vinland_(Vikings_in_the_New_World)?oldid=1155614"
Community content is available under CC-BY-SA unless otherwise noted.