Collectively the reigns of Thorey VI, Thorey VII, Eyfinna I and Greta II's are sometimes regarded as the Vinlandic Golden Age which roughly began with the end of First Lakota War in 1681 and would taper off towards the 1750s.

The period was marked by a rise in living standards, military and naval confidence and would be reflected in artwork, architecture and literature.

Skilled workers, especially from the Low Countries and Northern Germany which were devastated by the Fifty Years War had migrated to Vinland in large numbers in search of a peaceful life. They brought with them cutting-edge industrial know-how, capital to build successful companies and contacts in Europe to do deals with. The widespread adoption of water-driven sawmills, especially along the northern shore of Ontario Vatn, fuelled a boom in shipbuilding; by the start of Thorey VII's reign Vinlandic ships easier carried 50% of the entire trade of Leifia.

This naval might funnelled goods from Vinland's established base at Adyar in India, but also from Banten in Java (a 'factory' was established 1696) or Tupiniquimsuyu in Tawantinland, back to Fjallasay or, more profitably, European markets. Money, and an ever diverse array of goods flowing into ports, fed new fashions, building sprees and a desire among the merchant class to steer Vinland in a direction they thought best.

Success in the First Lakota War had given Vinland a huge influence over the newly liberated states on the plains. Vinlandic engineers and administrators poured into the new monarchies ready to build forts and set up the institutions of a early-modern state. Wheat, already grown sporadically by some tribes was suddenly a cash crop, easily grown to pay for the new infrastructure. Vinland imported as much as it could, storing it in vast quantities for poor years, evening out famines and riding them out and exporting excess whilst its rivals, Álengiamark included, still could face ruin during famine years.

During the reign of Greta I many of the draconian religious policies which had been implemented were rolled back. This liberalisation of Vinlandic society allowed the arts to flourish once again.

The ability of the crown to dominate Vinlandic politics had been repudated by the rolling back of Freydis III's clear abuses of power during the late 17th century, and by Thorey VI's ascension to the throne the court was looking increasingly sidelined. In place of direct political power Thorey and her advisors looked to reposition the monarchy as a champion of the people, rather than as protector of entrenched interests.

In many ways the old vested interests were on the wane anyway. The true nobility and landed classes would continue to hold sway in the countryside and increasing numbers of 'rotten counties' but in the growing cities the newly-moneyed merchants increasingly took over and would soon hold a firm grip on the Althing. Whilst they could now push an agenda which suited their agenda, the crown, and church to some extent, could step in to ensure the landless masses were taken care of.

This manifested most clearly in Thorey VII's coronation speech which outlawed slavery and serfdom. Serfdom had been a long-standing practice almost since the very first settlements in Vinland and instrumental in the state's early expansion. In the Maritime Fylkír where agriculture had waned thanks a worsening climate this had mostly been replaced by year-by-year visterband which tied laborers to a farm for a period of a year or so. However in the Hafvaedalands with new farmlands, mines or forests being exploited yearly (and a steady supply of potential serfs moving from the plains to Vinland), a more formal serfdom was practiced with laborers tied to their places of work for life with almost all of their personal lives dictated to. Outright slavery was less common; the few instances recorded were usually payments in lieu to merchant ships trading in West Africa.

Initially the newly freed serfs were compelled to sign a five-year visterbands with their current owner/employer but after that were free to move, marry and conduct whatever business they wished. One-year visterbands became the norm across Vinland. The newly liberated populace enjoyed higher living standards than most of their Liefian contemporaries, their erstwhile owners still prospered thanks to demand for foodstuffs in the cities and the navy. Landowners still made plenty of money from rents.

Food security ensured Vinland's population was free from hunger and the population boomed as result. It would grow from about 1 million in 1680 to 2.3 million a century later, and the fertility rate was above 4 for most of the period, reaching a high of 5.4 in 1736. Life expectancy was about 39 (though this is due more to infant mortality than poor general health).

With populations rising steadily and new communities and villages appearing there was a similar rise in the numbers of church buildings being constructed. Old churches were heavily restored or rebuilt during this period too and almost all tended to come with schools attached, raising literacy levels. The universities of Hvilirábey and Karantóborg still catered mainly for the wealthy but by the mid-1700s complete illiteracy was rare. The church and the crown also provided a renewed and strengthened Poor Law, mainly by removing paupers and beggars to the fringes of Vinland where new farms or forests were being exploited, or even pressed into service in the navy if the subject was unlucky enough.

Though much of non-Lutheran religion had been removed by Freydis III's purges, and the Puritans still held a considerable sway, religion was not uniform during the Golden Age and indeed other faiths and customs were welcomed (at a distance). The incoming Dutch émigrés were mostly Calvinists for example. In time most urban places banned gathering of non-Lutheran congregations within a certain distance of town centres. This led to new communities appearing outside the limits, often becoming hotbeds of enlightened thought and the arts. Towns such Vonáfjall outside Gudnýborg which boasted the philosophers Ísak Ísaksson and Unnur Hjaltisdottír and the novellist Thórarinn Johannasson. Vinland's first synagogue was built at Stokkseyr in 1723 though Jewish emigration to Vinland would be little more than a trickle for the next two centuries.

Pagan customs such as the Vesterblot or reverence for Odinist deities (now somewhat demoted from gods to something akin to saints) were openly tolerated and no longer had to be hidden away (see Vinlandic Folklore).

Vinlandic art had almost been extinguished during the mid-1600s, not through direct persecution but due to disinterest, the Puritans commissioned little but serious portraiture and while examples from this period are perfectly competent they appear almost amateurish compared to the works being created in Europe at the same time. This would change once émigrés from the Low Countries could establish new studios or re-invigorate existing ones. The newcomers were not the first or even second-rank great artists of their respective homelands but even so, they would still find a ready market in the merchants. 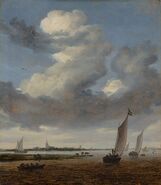 Árni Jakobsson and Family by Bjarki Sigurjónsson, 1755
Add a photo to this gallery

The new portraits created by the émigrés and their students would be much in demand by the moneyed classes. These straightforward works were soon joined by a variety of realistic works depicting the interior lives of the new grand houses, seascapes depicting the seas and vessels on which the merchants' wealth rested and eventually depictions of families on country estates.

In all the merchants were keen to show off their wealth with fine fabrics, decorated interiors (as a change from the austere puritanical minimalism of the previous century). Newly dug docks in Fjallsay were soon surrounded by new or refurbished grand houses filled with elegant furniture . When goods from Java were first brought direct to Vinland in 1700 it sparked a short mania for Javanese goods, either real or faked. Shadow puppetry was another Javanese import and the small Brodulýkhús in St. Katrinns is the oldest extant example of a dedicated shadow-puppet theatre. Eyfinna I had a more or less faithful copy of a Sudanese summer house built for afternoon teas in the grounds of Ononglegakest (the original burnt-down in 1769, Svenný III had the current one built in 1900).

While theatres had reopened during Greta I's reign they concentrated on old classics or bawdy comedies and it would take a while for audiences to crave something more meaty. Political plays, often dealing directly with the period of puritanical tyranny, were popular. Audiences looked to their own times for entertainment rather than the historical or fantastical.

The aforementioned Thórarinn Johannasson would write the quintessential Golden Age novel (and indeed would help popularise the format) with the wildly popular The Life and Times of Halla Pjetursdottír. He and contemporaries such as Baldur Valdemarsson, Dagur Hafsteinnsson and Katrín Brynjarsdottír wrote about changing society and the movement of people through it, fortunes being made and lost New publishing houses were established, spreading affordable books not only to Vinland but also to other Leifian countries, especially the newly formed states on the plains who were 'encouraged' to adopt a latin script over any native syllabaries. Saginauk's book fair, still the largest in Leifia, dates from 1690.

By the mid-1700s Vinlandic traders were feeling hard-pressed by competitors. Not only the old merchant powers from Europe but upstarts closer to home. Under the rule of Herridr I, Álengiamark had finally united and began to show its potential as an economic powerhouse, its close association with Portugal allowed it easy access to all Portugal's many ports around the world and when the Lisbon earthquake of 1755 destroyed Portuguese naval confidence Álengiamark was quick to take its place. Aniyunwiya too had a boom time during this period and by the mid 1700s was comfortably outstripping Vinland and its vassals' agricultural production of virtually every crop. Susquehanockland too had a long mercantile tradition and its relative neutrality allowed it access to ports in Europe which Vinland wasn't.

The War of the League of Arcachon had already cut into the Vinlandic fleet as Mexic squadrons sank almost half of the Taino fleet in the opening months. Attempts to make this up were frustrated by the fact Vinland's trading empire was quite narrow. The historian Ásgerdur Eilifursdottír remarks:

it is amazing that once installed in Java the merchants did not venture any further. There was no curiosity in exploring the Spice Islands for themselves, nor muscling into any proven markets like the Pearl River. They were merely content to let the goods flow to their trading posts which allowed rivals to steal the trade.

The eruption of volcano Katla in Iceland in 1755 would cause widespread famine across Leifia, food riots, unheard of in Vinland for decades would rock the cities and would inspire widespread protests against the merchants; shipping wheat across the Atlantic to worse-hit Europe for profit whilst Vinlanders starved at home. Whilst Vinland was definitely still prosperous the sense it had lost its competitive edge was palpitable.

Retrieved from "https://althistory.fandom.com/wiki/Vinlandic_Golden_Age_(The_Kalmar_Union)?oldid=1764376"
Community content is available under CC-BY-SA unless otherwise noted.