Westralia, officially known as the Kingdom of Westralia, is a sovereign state in Oceania. Westralia occupies the western third of the Australasian mainland. Westralia shares its only border with the Republic of Australia to the east. With an area of 2,529,875km2, Westralia is the second-largest state in Oceania, and is also the least densely-populated, with a population of only around 300,000 as of 1876.

Westralia's throne was formed following the issuance of its Declaration of Independence from the Empire of Greater Britannia on 1 August 1869, a date which is now celebrated as Independence Day. However, it remained unoccupied until the December of that year, when Prince Alexander of the Netherlands accepted an offer from the Government to become King. He was crowned on 1 February 1870, and founded the House of Swan-Orange-Nassau, Westralia's second and current royal house, after Britain's House of Hanover.

Soon after the coronation of Alexander I, the Government applied for membership in the Treaty of Hanseong, offering to open its primary port of Fremantle in Perth to signatories. 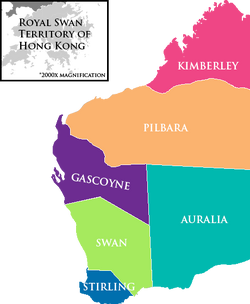 Westralia is divided into six states and two unorganised territories. Each state has its own semi-autonomous State Government and its own State capital.

Retrieved from "https://althistory.fandom.com/wiki/Westralia_(Emancipation_Map_Game)?oldid=1306228"
Community content is available under CC-BY-SA unless otherwise noted.